Just minutes before Arkansas’ football coaches got into their golf carts Monday for head coach Chad Morris’ Preseason Golf Tournament with the media, they began to smile and whisper to each other.

There were some high fives shared, and Morris and his assistants began sending out celebratory tweets, which usually signals something big has happened in recruiting.

It had indeed as news broke publicly that Warren wide receiver Treylon Burks (6-3, 210) had committed to Arkansas over LSU, Florida State, Michigan, Ole Miss, South Carolina and others.

It’s no ordinary acquisition as Burks is a game-changer, the 88th-best player in the 2019 class, according to ESPN, and arguably one of the top two prospects in the state in this class.

If he lived in a metro area instead of Warren, went to camps, sought attention and wasn’t so quiet and mild-mannered off the field, Burks would likely be a five-star prospect and in the top 25 nationally instead of the consensus four-star he is in the four major recruiting service rankings.

Burks is big, strong, fast, runs over people, makes them miss and runs away from tacklers, a three-sport all-state player and could arguably play every non-lineman position on the football field for Arkansas if needed.

Yet, he is also humble, polite, quiet and just likes to go about his business without all the fanfare, which is something far different than most high school superstars this year.

In the words of Anchorman’s Ron Burgundy, he’s kind of a big deal and just a straight out baller.

Perhaps Arkansas wide receiver coach Justin Stepp summed it up best in his tweet previewing the 15th and latest addition to a class that was in the 50s a week ago and is now No. 22 in the the 24/7 and Rivals team rankings and No. 31, in ESPN’s opinion, after landing six new pledges in the last eight days.

“Best Monday of my life!” Stepp tweeted. “Let’s Go! It’s a great day to be a Razorback #WPS #Hammerdown #OurState” 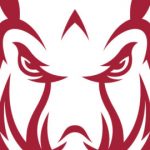 Stepp panicked for a moment after that, but remembered quickly that his new baby was born on a Thursday and he got married on a weekend, so he was safe in calling it his best Monday ever.

It can be argued that Stepp is one of the happiest coaches on staff with how recruiting is going overall and in the receivers aspect of things specifically.

Burks heads into his senior season having hauled in 143 catches for 3,159 yards and 39 touchdowns since becoming the first ninth grader to ever start for Warren head coach Bo Hembree, who is entering his 19th season as head coach of the Lumberjacks.

Those numbers would be even higher if he hadn’t been needed to play snaps at quarterback last season, where he rushed for 936 yards and 26 more touchdowns in addition to catching 45 passes for 1,090 yards and 14 scores last season.

That included having 116 yards rushing, 178 yards receiving, four touchdowns and 16 tackles in a virtuoso performance in a Class 4A state title game that Arkadelphia won 28-27 in a controversial finish.

“He did everything for us, played wide receiver, played quarterback, returned punts, returned kickoffs,” Hembree said. “I couldn’t even begin to tell you his importance to us.”

Pulaski Academy star Hudson Henry (6-5, 230) – the nation’s top tight end and a top-60 player nationally, per ESPN – said over the weekend that Arkansas was in a great place to land his signature.

Arkansas also appears to be in great shape with the Bentonville West duo of Jadon Jackson (6-2, 180) and linebacker Kendall Young (6-5, 220).

The only two of nine in-state players that Arkansas has offered who appear as if they may leave the state are offensive lineman Stacey Wilkins of Camden Fairview and Darius Thomas of Jonesboro – both of whom may announce their decision this week.

Wilkins, who was at Arkansas’ Woo Pig Nic cookout on Friday night, is thought to be leaning toward Oklahoma while Thomas has Memphis, Georgia and Auburn as his final three schools.

It’s never good to lose an in-state prospect, especially two four-star offensive linemen with offers from all over the country.

But one could argue that in every other area, this new staff is doing a very good job at landing prospects or at least putting themselves in good position to add targets they believe fit the program.

There was nothing cool whatsoever to this staff about being outside of the top 50 in recruiting. It is also duly noted that being 10th or 11th recruiting in the SEC is not a place you can live and compile a roster that wins the league.

There’s still a ways to go with somewhere between 7-10 more names to be added to the class, too. But it was a very, very good week for Morris and his coaching staff, and it appears more good news will be on the way later this week.

Anytime you jump 28-plus spots in the recruiting rankings, it’s been a great week. That’s the bottom line.