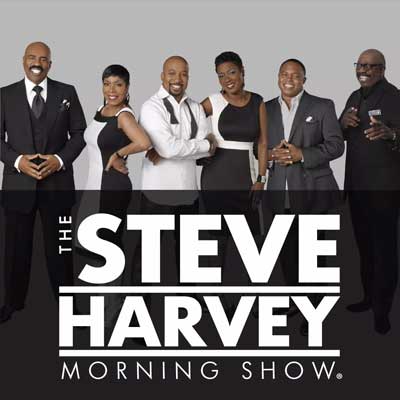 About The Steve Harvey Morning Show

Steve Harvey is the host of the Steve Harvey Morning Show radio program, and the popular TV shows STEVE, Family Feud, and Celebrity Family Feud. His popularity continues to grow to global proportions, bolstered by his role as host of the Miss Universe Pageant. In 2020, Family Feud will expand to Ghana and South Africa. Harvey is currently one of the most powerful voices in media, touting a career spanning nearly 30 years as a top stand-up comedian, actor, award winning TV personality and talk show host, best-selling author, entrepreneur, and humanitarian.

Harvey began his entertainment career as a comedian, working the stand-up circuit. He grew to have a roster of acclaimed specials, including co-starring in one of the most successful comedy DVDs in history "The Original Kings of Comedy", and the hit "Don't Trip...He Ain't Through With Me Yet".

Harvey first made his mark in television and film as host of Its Showtime at the Apollo. He went on to star in several popular shows, including The Steve Harvey Show and has appeared in such movies as You Got Served, and Johnson Family Vacation.

Harvey expanded his reach into radio as host of The Steve Harvey Morning Show. 2019 marked the program’s 14-year anniversary in national syndication with Premiere Networks and it’s the #1 syndicated morning show in America with more than 6 million weekly listeners on more than 100 stations nationwide. Harvey co-created and hosted The Neighborhood Awards from 2002-2016, awards show that honored local businesses, institutions, and leaders for the excellence demonstrated in their communities.

As a humanitarian and an entrepreneur, Harvey makes it a priority to give back. Through The Steve and Marjorie Harvey Foundation, he and his wife provide hundreds of teens annually with mentoring and educational opportunities. His company, HARCAL, allows him to create business partnerships that specifically target and benefit the working middle class.

Harvey’s list of accolades includes several NAACP Image Awards, a People's Choice Award, induction into the National Association of Broadcasters Hall of Fame, and a star on the Hollywood Walk of Fame. He also won the Daytime Emmy Award for Outstanding Talk Show Host for STEVE in 2018, The Steve Harvey Show in 2014, 2015 and 2017, as well as Outstanding Game Show Host for Family Feud in 2014 and 2017.

Harvey is a member of Omega Psi Phi Fraternity, Inc., and a proud parent with wife Marjorie to seven children.