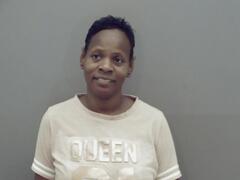 A Pine Bluff woman was arrested Wednesday after she fired shots at her husband during an altercation at their home.

Ora Fletcher, 54, was taken into custody after police were sent to the 1500 block of Belmoor Drive in response to a reported shooting.

Detective Sgt. Steve Rucker reported that when he arrived at the house, he saw spent shell casings on the floor and in the driveway and a glass door that was shattered.

During a court hearing Friday, Deputy Prosecutor Caleb Conrad said Rucker took a recorded statement from the victim and told the court what the victim said.

Rucker also reported that there were several small children in the house along with three adults who had witnessed the incident.

When Ora Fletcher was questioned, she said her husband had been calling her names and threatening to kill her. She said he had his hand in his pocket and was not sure what he had. She said she was in fear of her life, so she got her gun and shot at him. She said when he went outside, she followed him and fired more shots but didn’t know how many.

Jefferson County District Judge Kim Bridgforth set a $50,000 bond for Fletcher after ruling prosecutors have probable cause to charge her with aggravated assault on a family or household member. She was ordered to have no contact with the victim until the case is settled and to come back to court on July 14.