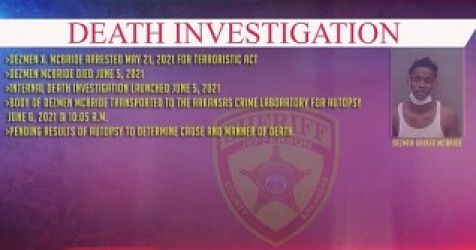 Dezmen X. McBride, 18, who was arrested on May 21, 2021, for Terroristic Act and was being held at the Jefferson County adult jail, the W.C. “Dub” Brassell Detention Center (DBDC), died at Jefferson Regional Medical Center (JRMC) at approximately 12:18 p.m. on Saturday, June 5, 2021. 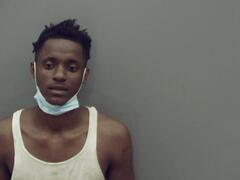 While in custody at DBDC, staff recognized that McBride was not feeling well and requested that Emergency Ambulance Service Inc. be dispatched to DBDC.  Ambulance personnel from Emergency Ambulance Services, Incorporated arrived and transported McBride to Jefferson Regional Medical Center, where medical aid was rendered and critical care was performed.  McBride was pronounced dead at approximately 12:18 p.m.

The cause and manner associated with the death of McBride remain unknown, pending the results of an autopsy being performed by the Medical Examiner at the Arkansas State Crime Laboratory.  The investigation is still very much active as it is ongoing and while McBride’s in-custody death as depicted by some because of speculation and/or their lack of knowledge of the circumstances surrounding his death certainly may raise questions, it would be premature to draw any conclusions prior to the completion of an internal investigation and/or potential criminal investigation.

As sheriff, I am firmly committed to the health and welfare of all those in our custody, no matter the circumstances that caused their confinement.  Like any case involving an in-custody death, there are a number of statements and other evidence that have to be evaluated as we move through our internal comprehensive and investigative review of the events leading up to the death of Dezmen McBride.

Until the completion of this investigation, it would be counter-productive to offer any further comments publicly or privately relative to any aspect(s) of this case or draw any conclusions until the internal death investigation has been fully examined.

I offer my deepest condolences and heartfelt prayers to the family of Dezmen McBride, as I realize the loss of a loved one is most difficult no matter the circumstances.  It is even more difficult when you don’t have all the answers that you are seeking.  We seek those answers with the family as well as the general public.

The investigation is active and ongoing and more details will be released when they are available.