The rainfall inundated several areas of the city, including the headquarters for the Pine Bluff Fire and Emergency Services and Pine Bluff Police Department. Firetrucks had several inches of water inside of them, as did offices behind them.

Pine Bluff received 3.44 inches of rain late Monday afternoon, which is a new record for rainfall in a single day in the city, according to the National Weather Service.

The Pine Bluff/Jefferson County Library, which is located in the civic center complex along with the police and fire departments, was closed Tuesday due to cleanup efforts. 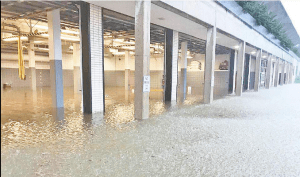 Lincoln County in State of Emergency due to flooding