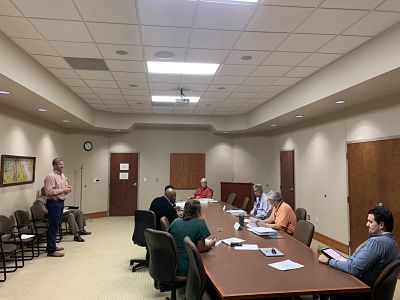 The Urban Renewal Agency met for their monthly meeting Tuesday, October 19th at 5:30 all members were present including  Chandra Griffin the new Interim Director of the agency. Among the items on the agenda, the commissioners approved six items on their agenda including a contract approval for their housing development, a Request For Quotation (RFQ) from a potential consultant for their downtown properties, and a partnership agreement with Go Forward Pine Bluff.

An update to a contract with Keys Construction is underway with URA for the housing developments that include both market-rate and affordable housing options. Griffin also spoke more about the update to the commissioners.

In reference to the RFQ the commissioners voted unanimously to approve the historic preservation consultants from Level 5 Architecture out of Springdale, AR to potentially evaluate and possibly redevelop the older buildings that URA owns downtown.

The commissioners also voted to join in partnership with Go Forward Pine Bluff to develop downtown, a ” Downtown Square” to complete the plaza at 6th and Main. Dr. Ryan Watley also spoke amongst the board and introduced the downtown development idea which included expanding to create an amphitheater, shopping centers, and/or restaurants.

Another item on their agenda that was mentioned was the old Saenger Theater that the agency has been partnered with the city to fix. They agreed to fix the plumbing issues through Razorback Plumbing out of Little Rock, AR at the amount of $12,500 and to fully their obligation to the electrical service of the building.

The board’s next scheduled meeting will be held on November 16th.