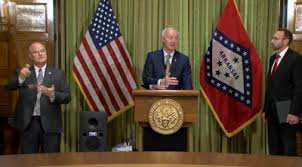 LITTLE ROCK, Ark. (AP) — Arkansas Gov. Asa Hutchinson on Tuesday extended his coronavirus emergency declaration by another two months as the state reported a record one-day spike in deaths and a new high in hospitalizations from COVID-19.

Hutchinson has used his emergency powers to impose restrictions, including a statewide mask mandate, to combat the pandemic. The emergency declaration was first issued in March and was set to expire at the end of the month.

The state reported Tuesday that 66 more people died from COVID-19, the illness caused by the virus, bringing Arkansas’ total fatalities since the pandemic began to 3,603. Tuesday’s death toll was the state’s highest since the previous record set just last week, when it reported 58 new deaths Dec. 21.

Arkansas legislative leaders earlier this month rejected a request by Hutchinson to meet by the end of December to vote on supporting an extension of the virus declaration. House and Senate leaders said they expected the issue to come up in next year’s legislative session, which begins Jan. 11.

Arrest made in June 7murder