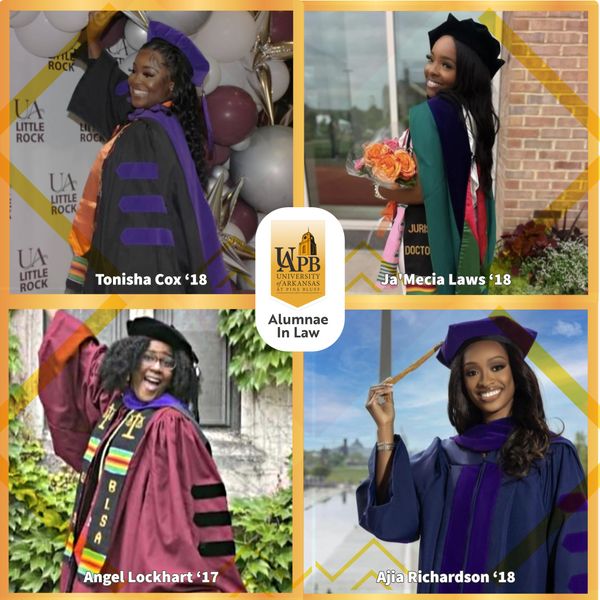 Henry Brooks IV, UAPB Political Science Instructor and a Ph.D. candidate in Public Policy, played a critical role in advising these students. Brooks makes himself available to advise any student interested in attending graduate and professional schools.   According to Mr. Brooks, “Our prelaw work is starting to look more like a proper prelaw program. Several of our current students and alumni just completed a semester-long Law School Admission Test (LSAT) course with Professor cummings from the UALR Bowen School of Law. Our two institutions have an admissions agreement that benefits our student’s admission if they obtain a certain GPA and LSAT score. We are also in touch with the University of Arkansas Law School in Fayetteville on the possibility of duplicating that agreement.”

We collected their bios so that you can meet these women-in-law. Their biographies will reveal their past, present, and future endeavors.

Tonisha Cox, better known as Toni, is from East St. Louis, IL. In 2018, she graduated from the University of Arkansas at Pine Bluff (UAPB), receiving a B. A. in Political Science.  While at UAPB, Toni was an active member of the Student Government Association and Political Science Club, president of Black Essence, residential assistant for the LIONS Program, and student leader for the Office of Recruitment. She also interned at the Law Office of Danyelle Walker, PLLC, in Little Rock and at the Arkansas State Capitol for Representative Vivian Flowers of District 17. Tonisha is also a Spring 2016 initiate into the Delta Eta Chapter of Delta Sigma Theta Sorority, Incorporated. In May of 2022, she graduated from William H. Bowen School of Law, UA Little Rock. Tonisha was the Scholarship Coordinator for the Black Law Students Association, a member of the BLSA and school Trial Team, Henry Woods Inn of Court, and Phi Alpha Delta Law Fraternity. She also had the opportunity to clerk at several firms in the Little Rock area.

During her free time, she volunteers at expungements clinics. In addition, she visits high schools and youth organizations to advise, answer questions, and speak about her college experience. Tonisha plans to take the Pennsylvania Bar Exam where she will later join the Philadelphia District Attorney’s Office as Assistant District Attorney.”. Being a lawyer is a dream that she developed at a young age, and she is excited to be one step closer to that dream. Tonisha loves to eat tacos & nachos as well as spend time with her dog, Mr. Brown. A quote she lives by is “Beat the Odds. Do numbers. And Remain Humble.”

Ja’Mecia Laws is from Belleville, Illinois, where she currently resides and serves as a Mayor-appointed member of the city’s Human Relations Commission. In Fall 2018, she graduated from UAPB with a B.A. in Social Sciences/Political Science. Ja’Mecia was an active member of the Student Government Association and president of Essence of a Woman. In addition, Ja’Mecia was a Fall 2018 Initiate of the Alpha Rho Chapter of Alpha Kappa Alpha Sorority, Incorporated. Ja’Mecia attended Washington University School of Law in St. Louis, Missouri, where she graduated in May 2022.

In her free time, Ja’Mecia loves to serve her community through her church and her sorority. After taking The Missouri Bar, Ja’Mecia will join the dynamic trial attorneys at Schlichter Bogard & Denton, working to promote justice for individuals affected by mass torts.

She graduated from the University of Chicago Law School in June 2022, receiving the Herbert L. Caplan Prize for Creative Legal Thinking and the Pro Bono Service Initiative Award. During her time in law school, Angel was an active member of the Earl B. Dickerson Black Law Students Association, First Generation Professionals, and a student-led writing project called Bridges. She also served as the Development Editor for The University of Chicago Business Law Review and a research assistant for Professor Sharon Fairley.

During law school, Angel worked with the Federal Criminal Justice and interned with the Fair Elections Center in Washington, D.C. She participated in the ABA Section of Litigation Judicial Intern Opportunity Program (JIOP) at the Maricopa County Superior Court in the Criminal Department. She also interned as a 1L Summer Associate at Osborn Maledon, P.A., a Phoenix law firm. Angel will begin her legal career clerking for Vice Chief Justice Ann A. Scott Timmer of the Arizona Supreme Court.

Angel likes to watch comedy, go hiking, and spend time with family in her free time. However, she occasionally volunteers with The National Lawyers Guild Legal Observer program amid recent protests. This program ensures law enforcement officials do not infringe upon anyone’s First Amendment right to assemble peaceably.

Ajia Richardson is a Pine Bluff native and a 2018 graduate of UAPB with a bachelor’s degree in Political Science. While at UAPB, she interned with the Congressional Black Caucus Foundation (CBCF) and was initiated into the Delta Eta Chapter of Delta Sigma Theta Sorority, Incorporated in the Spring of 2016. Ajia was a member of the Lady Lions Women’s basketball team.

Ajia is a 2022 graduate from Howard University School of Law. During law school, Ajia interned with Amazon Studios and United Talent Agency (UTA). She also interned with Epps Firm, LLC, a boutique business and intellectual property law practice that provides legal advice to creatives and entrepreneurs. While at Howard University School of Law, she served as a student attorney of the Intellectual Property Trademark Clinic and a member of the Sports and Entertainment Law Student Association (SELSA). She led as SELSA’s 2022 Chair of their annual Center Court Conference. Ajia plans to take the Georgia Bar Exam and use her knowledge accumulated at Howard to implement equity in the entertainment field.

$25,000 bond set for woman accused of setting car on fire