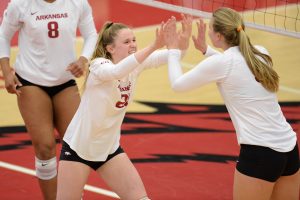 FAYETTEVILLE, Ark.- The Arkansas volleyball team swept Georgia Friday night, the third conference sweep for the team this season. With the win, the Hogs improved to 11-12, 5-8 SEC.

Both teams played a close first set, seeing 15 ties and seven leads changes before the Hogs pulled away for a 25-23 victory. Arkansas dominated the second set with a 25-13 win that never saw a lead change or tie.

The Razorbacks put the match away and clinched the sweep with a 25-19 third-set win.

Arkansas will return to the court Sunday to host LSU. First serve is set for 1 p.m.