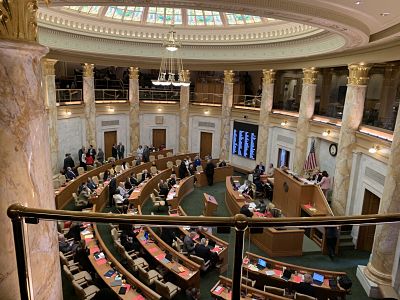 The University of Arkansas at Pine Bluff Athletic program was honored for its accomplishments and sacrifices to dominate in multiple sports through the constraints of the pandemic at the capital on Tuesday morning by the House of Representatives.

Representatives from the Pine Bluff area Vivian Flowers, Ken Ferguson, and Mike Holcomb sponsored a House Resolution to commend The University of Arkansas at Pine Bluff Athletics Department and Student-Athletes. The resolution included the accomplishments of the Football, Volleyball, and Golf programs who all had exceptional seasons this year and maintained exceptional academic performances.

The volleyball team finished their season as the runner-up to take the SWAC Championship. UAPB Golf is preparing for the PGA Collegiate Invitational Championship held in Ponte Vedra Beach, FL. May 2-8 at the TPC Sawgrass Course after placing third in SWAC Championships, and the football team will be gearing up to participate in the Cricket Wireless SWAC Championship in Jackson, Mississippi Saturday, May 1st with the pre-game show beginning at 1 p.m. live on 99.3 The Beat.

All three of these programs also featured Student-Athletes that achieved highly ranked awards and many of the coaching staff also contributed to achieving special accolades.