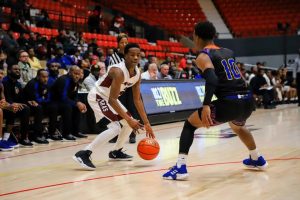 Size, height, athleticism, speed, IQ and fundamentals are all key factors for an individual who’s playing the game of basketball.

Pine Bluff High senior guard Kaleb Higgins, who stands 5-foot 8-inches and weighs 132 pounds, has averaged 30.5 points per game through the non-conference slate of this season and has earned the admiration of Zebras Head Coach Billy Dixon.

“College coaches have been calling him all year,” Dixon said.

“They’re piggybacking off of last year when he closed out so well. To begin this season, he came out and scored 32 in the first game, and they jumped right on him. He scored 32, 29 and 42 right off the back. He knows that there’s interest out there and they’re looking. They want to know what his ACT is GPA is. Basketball-wise, he’s also leading the team at five assists per game and four steals a game. His average of 4.7 turnovers has a lot to do with him having the ball in his hands, and he’s pressing trying to do so much.”

Although Higgins may not have the ideal size and height of a prototypical guard who plays on the next level these days, his heart and passion for the game have seemed to offset that, according to Dixon.

“I messed with him when he was a sophomore and told him he would be one of the top guards in the state when his time came,” Dixon said.

“His IQ is so high, and he’s playing on all three levels. He can shoot it deep, get to the rack, and knock down the mid-range. Size isn’t a factor to him as it is to others. When I first started coaching him, I told him his size may keep him from getting to the rack, but he quickly proved me wrong. You learn as a coach to stay out of his way. (He’s) just a complete player.”

Higgins didn’t disappoint in the King Cotton Holiday Classic last weekend, scoring 35, 30 and 29 points in the Zebras’ three outings. Higgins was named to the First-Team All King Cotton list that was constructed by the Pine Bluff Commercial.

One of the most intriguing parts of Higgins’ game is his ability to shoot the ball behind the NBA three-point line and knock them down with ease, Dixon said.

When comparing him to other small guards who don’t let their size get in the way of their success, a few NBA greats came to Dixon’s mind.

“He’s a guy that’s sound, pound for pound,” Dixon said. “He reminds me of an Allen Iverson, Kyrie Irving or Stephen Curry. This summer, he made a comment that nobody will stay in front of him, and so far he’s lived up to that. What separated him is the understanding of the game. He has the confidence.”

By Ocie B. Brown