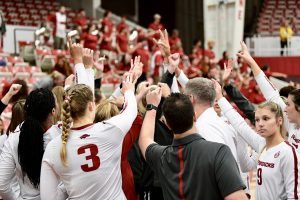 TUSCALOOSA, Ala.– The Arkansas volleyball team fell 3-2 in a heart breaker Friday night at Alabama in the team’s season finale.

The Hogs closed the season at 11-17 (5-13 SEC) in head coach Jason Watson’s third year season with the team. Arkansas saw several milestones this season, with senior Okiana Valle finishing her career in cardinal and white with the second-most all-time digs in program history while Rachel Rippee is now fourth in all-time assists.

The Razorbacks started the match slow, dropping the first set 25-13. Arkansas gained momentum in the second set, tying the match with a 25-20 win.

The team went up a set following a 25-23 third-set win, before the match was once again evened with a 25-10 victory from Alabama. Arkansas pulled ahead early in the final set, but eventually fell 15-10.