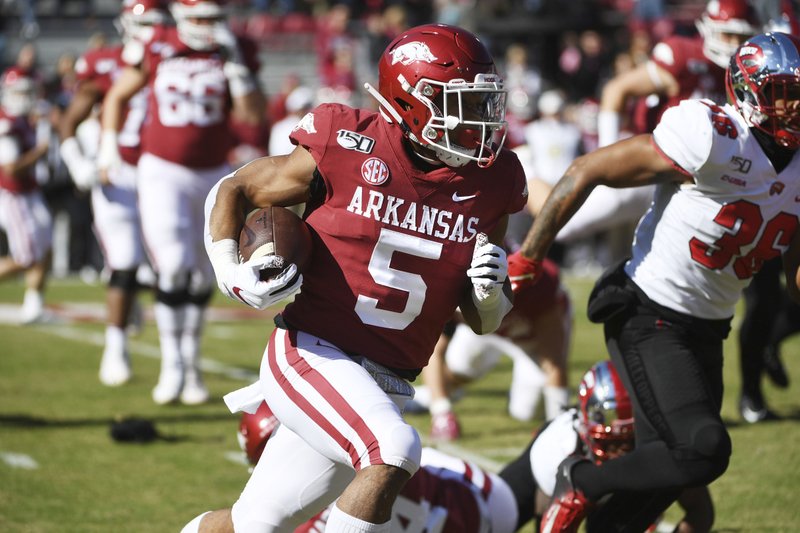 National title hopes usually aren’t on the line in the first game of the season. Nothing about 2020 college football is as usual, though. Georgia starts its season as the No. 4 team in the FBS ahead of its 10-game, all-conference schedule. Dropping an opener to Arkansas, which hasn’t won an SEC game since October 2017, would put a severe damper on such hopes.

Arkansas RB Rakeem Boyd vs. Georgia’s defense. Even on a team that was 13th out of 14 SEC teams last year in total offense, Boyd ran for more than 1,100 yards. He was named to this year’s preseason All-SEC second team. Georgia had seven defensive players given preseason all-conference honors. If they contain Boyd, the chances of a major upset are limited.

Georgia: The quarterbacks. It’s unclear whether JT Daniels or D’Wan Mathis will get a majority of the snaps for Georgia. Daniels was the projected starter, but has yet to be cleared to play and is a game-time decision. Mathis underwent emergency brain surgery in May 2019 and has made his way back into contention for first-team reps.

Arkansas: QB Feleipe Franks. While Boyd is Arkansas’ best player, the Razorbacks will feel better about their offense if they get the old Franks. The former Florida quarterback threw 24 touchdown passes and six interceptions with the Gators in 2018. A leg injury ended his season last September, and he subsequently transferred to Arkansas.

First-year Arkansas coach Sam Pittman was an assistant head coach and the offensive line coach at Georgia before he left in December to run things with the Razorbacks. Before Georgia, he served as Arkansas’ offensive line coach from 2013-2015. … Georgia has lost to Arkansas just once since 1993. The Bulldogs won the last meeting in 2014, 45-32. … Georgia hasn’t lost an SEC opener since 2014. Arkansas hasn’t won an SEC opener since 2010 against the Bulldogs.

UAPB football opens up “spring” practice in preparation for 2021 season