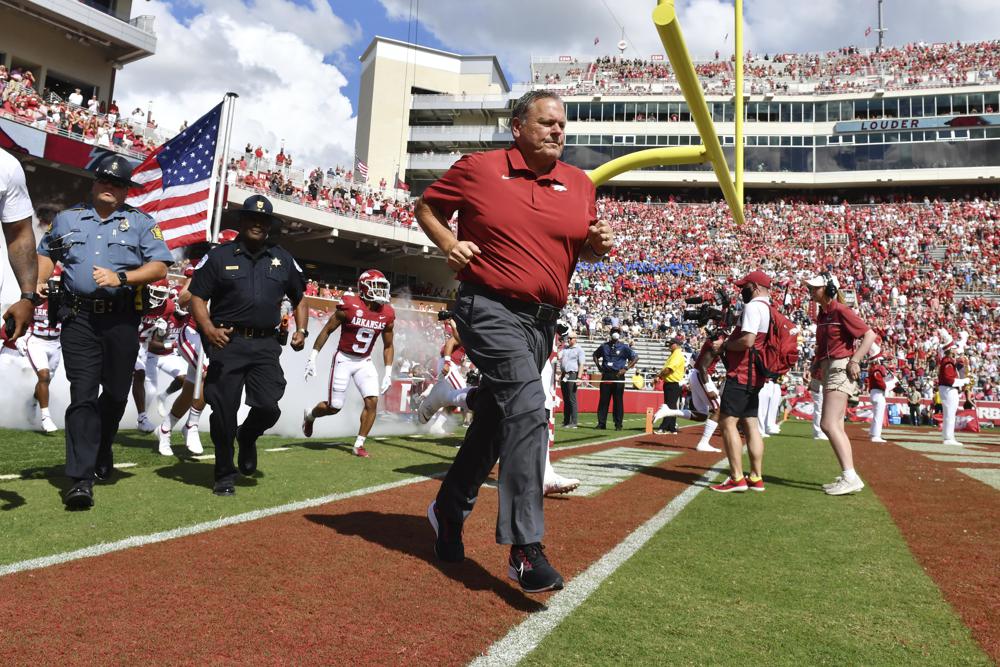 Arkansas coach Sam Pittman leads his team onto the field to play Georgia Southern during the first half of an NCAA college football game Saturday, Sept. 18, 2021, in Fayetteville, Ark. (AP Photo/Michael Woods)

“It’s hard to get the big head because somebody is going to knock you out if you’re not prepared for them and our team understands that,” Pittman said this week with the Razorbacks off to a 4-0 start for the first time in 18 years.

That knockout alert is well-timed as No. 8 Arkansas prepares for Saturday’s visit to No. 2 Georgia in a matchup of undefeated Southeastern Conference teams.

Georgia (4-0, 2-0 SEC) has leaned on the nation’s top defense to outscore opponents 174-23. Like Pittman, Georgia coach Kirby Smart is wary that overconfidence could lead to an unpleasant reality check.

“I don’t know that we are playing to our full potential,” Smart said Wednesday when asked about the strong start by his defense.

Arkansas moved up the Top 25 poll after last week’s 20-10 win over No. 7 Texas A&M. The Razorbacks have emerged as a surprise of the SEC in its second season under Pittman, the former Georgia offensive line coach.

The Razorbacks didn’t win a SEC game in 2018 or 2019 before finishing 3-7 last season. Pittman’s Razorbacks already have claimed two wins over top 15 teams this season, including a crushing 40-21 defeat of No. 15 Texas that sent Arkansas fans rushing onto the field.

Pittman worked four years on Smart’s staff before moving to Arkansas. The Bulldogs took a 37-10 win at Arkansas to open last season in Pittman’s debut, but this will be the first return to Athens for Pittman and his wife, Jamie.

“We’re sure looking forward to going back to Georgia,” Pittman said. “The people of Georgia were so kind to Jamie and I when we were there.”

Pittman said he has “a lot of good memories” about Smart “and the way he treated me.”

Smart said Pittman and his staff “have done a tremendous job creating a new culture and energy there at Arkansas. I would expect nothing less from him. I’m very thankful for what he did with our organization before he left.”

Georgia senior left guard Justin Shaffer said “I will always be grateful to coach Pittman. I would not be here today if it was not for him. He taught me a lot to get me where I am today. He had to move on. Business is business.”

Meanwhile, Arkansas quarterback KJ Jefferson is expected to start after missing most of the second half the win over Texas A&M with a bruised knee. He returned for the final drive.

“When you run the ball successfully, you create one-on-one opportunities and shots,” Smart said. “They’ve done that well. I also think their quarterback does an unbelievable job of throwing the deep ball. That is probably the best throw that KJ makes. Getting the timing on the deep ball. They have some really big wideouts that create matchup issues.”

Jefferson averages 18.4 yards per completion, the top mark of any FBS quarterback.

Each team is accustomed to strong starts. Arkansas has outscored its opponents 34-0 in the first quarter. Georgia holds a dominant 76-6 advantage in the first 15 minutes.

The Bulldogs have not allowed any points in the second or third quarters.