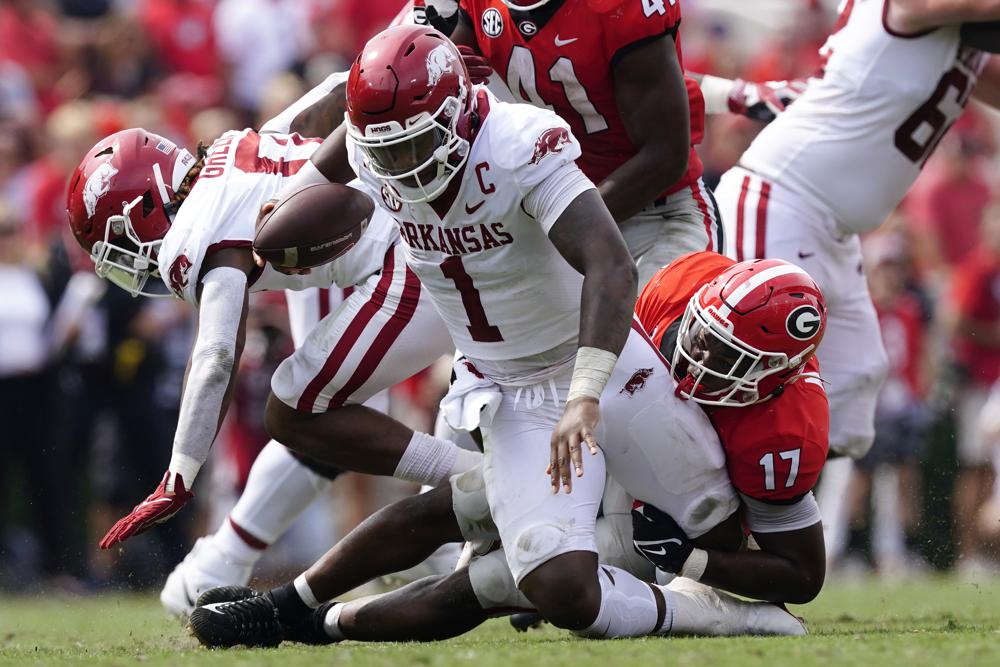 Line: Ole Miss by 5 1/2, according to FanDuel Sportsbook.

Both teams are trying to rebound from losses to the nation’s top two teams after great starts to the season. The Razorbacks want to get their offense back on track after a 37-0 loss to No. 2 Georgia. The Rebels dropped a 42-21 game at top-ranked Alabama after trailing 28-0 at halftime. The winner can still stake a claim as perhaps the second-best team in the SEC Western Division.

The Ole Miss offense didn’t really get it going against Alabama but it still ranks third nationally, averaging 549.2 yards a game and fifth in scoring (44.8 points per game). The Razorbacks defense is ninth, allowing 280.9 yards per game. But they face a huge test in quarterback Matt Corral, wide receiver Dontario Drummond and tailback Jerrion Ealy. Arkansas couldn’t stop the run well enough against Georgia, which won despite passing for just 72 yards.

Arkansas LB Bumper Pool leads the stingy defense with 49 tackles, including three for a loss. Pool & Co. face a diverse offense that goes beyond just Corral’s big passing numbers. But the Razorbacks do rank second nationally in pass defense, giving up just 129.9 yards a game.

Ole Miss QB Corral was victimized for six interceptions and lost a fumble in last year’s loss to the Razorbacks. But he has yet to throw a pick this season and has 16 consecutive games with a passing touchdown, tied for second in program history.

Arkansas is one of four teams in the country with multiple wins against Top-15 teams, joining Alabama, Georgia and Stanford. … Ole Miss is one of five teams who haven’t thrown an interception this season. … Rebels DE Sam Williams’ 1.25 sacks per game leads the SEC and is third in the FBS. He has a sack in every game this season. … The Razorbacks are seeking their first 5-1 start since the 2011 season. … Arkansas WR Treylon Burks has a catch in 25 consecutive games. He is one of only four current FBS players to record a reception in every game of his career (minimum 20 games).

Mississippi and Arkansas got to see how they stacked up against the Southeastern Conference’s two dominant teams.

Now, they get a fairer measuring stick: each other.

“This is the SEC and the SEC West,” Ole Miss coach Lane Kiffin said. “You go and play the No. 1 team, and now you have to go up against a top 15 team that obviously struggled last week.

“What it appears is that there are two super teams this year with great players on both sides but especially defense, and then it seems like there’s a dropoff. So gauging them in that game, everyone has struggled.”

Neither team fell all that far in the poll, and Arkansas coach Sam Pittman figures that’s a tribute to how good Georgia and Alabama are. Pittman admits the atmosphere may have intimidated his team.

“I think everybody saw we just weren’t ready for the grand stage yet,” he said.

Matt Corral gets another crack at an Arkansas team that intercepted six of his passes last season. The Ole Miss quarterback also lost a fumble in that 33-21 defeat. But Corral hasn’t thrown an interception yet this season.

Pittman recently watched an interview with Corral from after that game.

“I’m sure he’s going to be really excited to play us because in his words he didn’t play very well,” the Arkansas coach said. “So we’re looking for his best effort, like he’s been giving each and every game. But he’ll probably have a little bit more on this one because of last year.

“We can’t do identically what we did last year because if we do he’ll pick us apart. We’ll certainly put some wrinkles on there on defense.”

Arkansas’s KJ Jefferson, like Corral, is a threat to run. The 6-foot-3, 245-pound Jefferson has run 40 times for 235 yards and two touchdowns and is the only SEC quarterback with 900 passing yards and 200 rushing yards this season.

Kiffin said it’s “crazy how big he is. Maybe Cam (Newton) was that big at one point, I don’t know. That’s an issue because he’s like a giant running back back there when he runs the ball and he has improved in some throws.

“So very dangerous. They make a lot of big plays off the run game.”

Pittman didn’t summon his players for a big team meeting to address the Georgia loss, not wanting to be “sending a message that I’m panicking.”

“And I’m not. I think we’ve got a good football team and we got our butt kicked by a really good football team,” Pittman said. “And we don’t like it and we’re not accepting it, but I’ll be damned if Georgia’s going to make us lose this game.”

Ole Miss tight end Chase Rogers said the Rebels still have the confidence despite a loss to Alabama, when the game was 28-0 by halftime.

“Were going to keep moving forward and on to the next one,” Rogers said. “That’s in the past.”

The game features two of the nation’s Top 20 running teams. The Rebels are 10th averaging 243.5 yards per game on the ground. The Razorbacks’ 224.6-yard average is 18th.