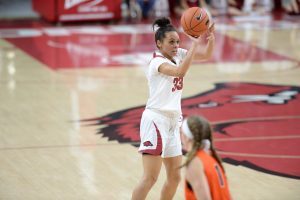 NASHVILLE, Tenn. – A 27-point fourth quarter lifted the University of Arkansas women’s basketball team to a 79-55 win over Tennessee State at the Challenge in the Music City in Nashville, Tennessee, on Friday.

Redshirt sophomore Chelsea Dungee was 2-for-2 from the field and 5-for-7 from the line for nine points in the final 10 minutes of the game as the Razorbacks outscored the Lady Tigers 27-7 breaking open a close contest.

Dungee finished with a team-best 16 points and was one of four Razorbacks in double figures for the game.

Arkansas (3-1) didn’t score for the first two minutes of the contest spotting The Lady Tigers a 5-0 lead. Dungee tallied the first points for the Razorbacks sparking a 22-7 run and allowing Arkansas to take a 22-12 lead after the first quarter of play. Malica Monk had eight points and Alexis Tolefree six points in the first frame. The duo finished with 13 and 14 points, respectively.

The Razorbacks struggled in the second quarter committing nine fouls and going just 4-for-16 from the floor. TSU made nine free throws and hit three 3-point field goals to erase a 10-point Arkansas lead. Bailey Zimmerman kept Arkansas close with eight second-quarter points, but the Lady Tigers drained a final 3-pointer at the buzzer as the Razorbacks clung to a 37-34 advantage at the beak.

As the fouls mounted, Arkansas went to the bench and got a big spark from sophomore Macy Weaver in the third quarter. The Davis Junction, Illinois, native grabbed two quick rebounds and helped Arkansas build the lead to as much as seven points in the final three minutes of the period.

That momentum sparked a 33-10 run to close out the final 13 minutes of the game as Arkansas held the Lady Tigers to 14.3% shooting in the fourth quarter.

Key Stats
•Chelsea Dungee led the Razorbacks with 16 points. Alexis Tolefree added 14 points followed by 13 points from Malica Monk and 12 points from Bailey Zimmerman. Kiara Williams is the first Razorback to record double-digit rebounds this season with 11 boards in the win.
•Arkansas committed 10 turnovers in the first half but had just four miscues in the second half of the game.
•The Razorbacks recorded eight blocks. The most since an eight-block contest at Nebraska in November of last season.
•Arkansas had season-bests for free throws (26) and free throw attempts (38), offensive rebounds (14), blocks (8) and steals (12).

Notes
•Arkansas starters: Alexis Tolefree, Malica Monk, Kiara Williams, Jailyn Mason, Chelsea Dungee
•Arkansas is 24-9 all-time on the Friday after Thanksgiving.
•Arkansas is 101-45 in in-season tournaments.
•The Razorbacks are 59-43 in road tournaments.
•Arkansas has led at the half in three games and is 3-1 when leading after the first 20 minutes.
•The Razorbacks were outscored 22-15 in the second quarter. It is the first time this season Arkansas has been outscored in that period.