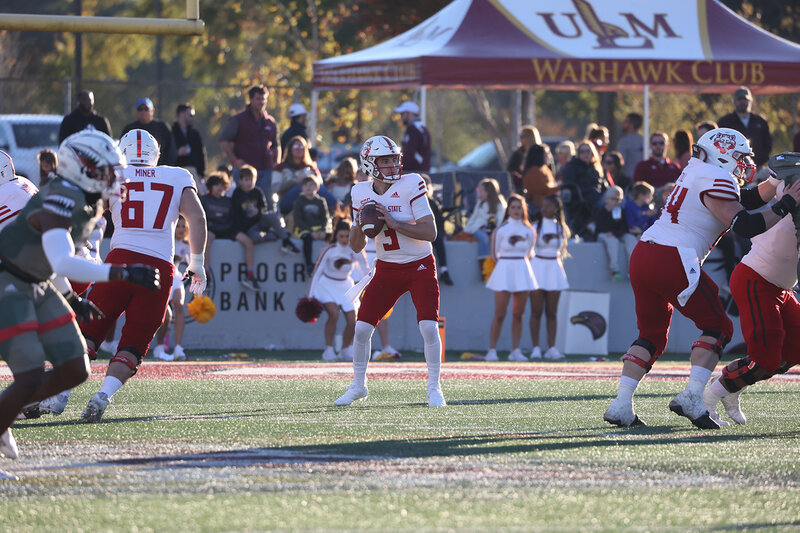 Blake Grupe drilled a 42-yard go-ahead field goal with 1:17 to go and a Samy Johnson interception with 20 seconds remaining propelled the Arkansas State football team to a 27-24 win over ULM Saturday at Malone Stadium.

“We created a lot of adversities for ourselves, but I thought our defense kept us in the game in the first half,” head coach Butch Jones said. “I thought we left a lot of points out there, but you have to gut through wins like this. To win a game like this, on the road, when everything doesn’t go your way, it was great to see moving forward. We found a way to get off the field and drive the ball, and then (Blake Grupe’s field goal), very fittingly. I’m just really proud of our players and finding a way to win a football game after everything they’ve been through.”

Layne Hatcher completed a career-high 34 passes on 50 attempts for a career-best 444 yards and a pair of scores, with Corey Rucker eclipsing the century mark with 7 catches for 103 yards. Hatcher’s 444 yards stands as the second-most in a single game by an A-State player in program history.

Te’Vailance Hunt caught both of Hatcher’s touchdown strikes as part of an 8-catch, 96-yard day. On the ground, Lincoln Pare rushed a career-high 22 times for a season-best 73 yards rushing.

ULM recorded 195 yards through the air, with Rodriguez accounting for 160 of those yards on 12 of 29 passing with a score. Chandler Rogers also completed 4 of 6 passes for 35 yards. Boogie Knight was the top pass-catcher for the Warhawks, snagging 5 catches for 76 yards. Malik Jackson churned out 166 of ULM’s 177 rushing yards with two scores and a long of 75.

Rucker put A-State on the board first with 11:15 to go in the opening quarter on a 9-yard rushing score to give the Red Wolves a 7-0 lead after one quarter. A-State’s lead grew to 10-0 when a 30-yard field goal by Grupe split the uprights. ULM responded with 33 seconds left in the half on a three-yard run up the middle by Jackson, making it a 10-7 lead for the Scarlet and Black at the half.

The Warhawks then took a two-score lead early in the third on a pair of scores. Jackson took the ball on the first play of the second half 75 yards to give ULM a 14-10 lead, then Rodriguez found Jevin Frett for a 17-yard scoring strike to make it 21-10 with just over 10 minutes remaining in the third.

Hatcher found Hunt for the first time in the contest with 7:26 left in the quarter on a 22-yard pass to trim the deficit to 21-17, but ULM added a 32-yard field goal by Calum Sutherland to once again make it a touchdown lead after three.

With 7:56 left, Hatcher connected with Hunt again, this time from 20 yards out for the game-tying score. A-State’s defense then held strong the rest of the night, forcing punts after short ULM drives. Then, Hatcher led the Red Wolves on what would be the game-winning drive, ending with Grupe’s 42-yard kick that sailed through the posts to give A-State a 27-24 lead with just over a minute remaining.

The Warhawks drove across midfield and looked to get into scoring position, but Johnson leaped high to pick off Rodriguez’s deep pass, sealing the Red Wolves’ victory.

A-State remains on the road for one more week, traveling to Georgia State for its final road test of the season. Kickoff at Center Parc Stadium in Atlanta is set for 1 p.m. CT on Saturday, Nov. 20. The game will be broadcast live on ESPN3.