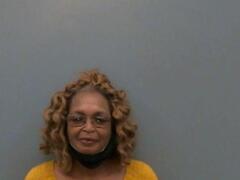 A Pine Bluff woman was arrested Saturday after she allegedly stabbed another woman during an altercation.

Wanda Long-Bowman, 58, told police she became angry after finding her husband having intercourse with the alleged victim at a motel on East Harding Avenue.

During a court hearing Monday, Deputy Prosecutor Jay Gerard said the incident occurred at the Executive Inn at 2902 E. Harding Ave. and when police arrived, they found a trial of blood in room 205.

The victim had been taken to Jefferson Regional hospital by Bowman’s husband who told police his wife had entered the room and tried to fight him and the victim. He said his wife pulled a small knife out and started swinging it.

The victim said when Bowman started swinging the knife, she tried to her on the other side of the bed to stay away but Bowman managed to get to where she was and stabbed her on the left side of the stomach.

On Monday, Pine Bluff District Judge John Kearney set a $15,000 bond for Bowman after ruling prosecutors have probable cause to charge her with first-degree battery. Bowman was ordered to have no contact with the victim and the Public Defender’s Office was appointed to represent her.

$5,000 bond set for man arrested on drug and weapon charges

Man arrested for allegedly being involved in shooting