William “Bill” Ventres, M.D., M.A., assistant professor in the Department of Family and Preventive Medicine in the College of Medicine at the University of Arkansas for Medical Sciences (UAMS), was invested Sept. 17 as the holder of the Ben Saltzman, M.D., Distinguished Chair in Rural Family Medicine.

Ventres, who joined UAMS in 2017, is a family physician and medical anthropologist with more than 30 years of clinical experience working with disadvantaged patients. He is known as a leader in developing family medicine internationally, researching doctor-patient communication using qualitative methods, and studying the social history of family medicine in the United States. He plans to encourage students and residents to practice in rural and underserved areas in Arkansas to improve health outcomes. 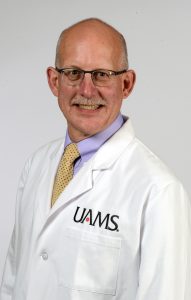 “It is a great honor to receive the Saltzman Chair, with its emphasis on rural and underserved family medicine,” Ventres said. “When I was in medical school and residency, I saw that lots of patients felt left out. Sometimes they were poor or uneducated, sometimes it was because of where they lived, and sometimes it was because of the color of their skin or the language they spoke. I didn’t see that medicine was doing a very good job helping these people, so I found my small niche in working to try and change things in this area.”

An endowed chair is among the highest academic honors a university can bestow on a faculty member. A distinguished chair is a $1.5 million endowment established to support the educational, research and clinical activities of the chair holder who will lead future innovations in medicine and health care. Those named to a chair are among the most highly regarded scientists, physicians and professors in their fields.

“The choice of Dr. Ventres to assume this chair is a very wise decision, and that’s because of his passion for the very highest quality of medicine and for his passion for taking care of his fellow man, which he has demonstrated throughout a long career and all parts of the world,” said Christopher T. Westfall, M.D., dean of the College of Medicine. “I am absolutely convinced that he is the right holder for this chair.”

The chair is named in honor of Ben Saltzman, M.D., who has been called the father of rural family medicine in Arkansas. Saltzman joined UAMS in 1974 as the first professor and chair of the Department of Family and Community Medicine. During his seven-year tenure, he served as director of rural medicine development and the flexible internship program. In 1981, he was appointed director of the Arkansas Department of Health and served until his retirement in 1987. Saltzman died in 2003.

Saltzman built the first hospital in Mountain Home and helped establish others across the state. He is remembered as a champion of rural health and an international leader in helping eradicate polio. Saltzman made health care more widely available and worked as a traveling doctor who owned a twin-engine plane for his work.

Saltzman was past president of numerous statewide health organizations, including the Arkansas Lung Association, what is now The Arc Arkansas, the Arkansas division of the American Cancer Society and the Arkansas Board of Health. He served as chairman of the American Medical Association’s Council on Rural Health, as a member of the U.S. Department of Health and Human Services’ Community Health Project Review Committee, and as a member of the National Advisory Health Services Council.

“Dr. Saltzman was quite a leader in our state, and this endowment is to help those who follow his example as we expand our programs for the underserved and in rural medicine,” said Daniel Knight, M.D., professor and chair of the Department of Family and Preventive Medicine. “In his short tenure here, Dr. Ventres has made quite a difference, and we’re excited to see the difference he’ll make going forward.”

Ventres was presented with a commemorative medallion by Westfall and Knight. He thanked Saltzman and recognized Julea Garner, M.D., the previous chair holder. Ventres reserved special thanks for his wife, Estella and his children, Roby and Cory, who were in attendance.

“With all the technologies that are supposed to make things smoother, we are sometimes prone to overlook what is most important in our work – the people we serve,” Ventres said. “I commit to you to learning from the people of Arkansas, as I am able, to see them as full of worth and dignity; to appreciate their presence; and to engage with them in a way that invites conversation, collaboration and compassion.”

“The work of improving the health of all Arkansans, wherever they may be, is not the task of one person – it is a responsibility we all share,” Ventres said. “And we are all enriched by the labor we invest to fulfill it.”

Ventres has served as visiting professor at Nelson Mandela University in Port Elizabeth, South Africa, and scholar-in-residence at both the Brocher Institute in Geneva, Switzerland and the Institute for the Medical Humanities at the University of Texas Medical Branch at Galveston.

Walton Family Foundation to Give $2 Billion