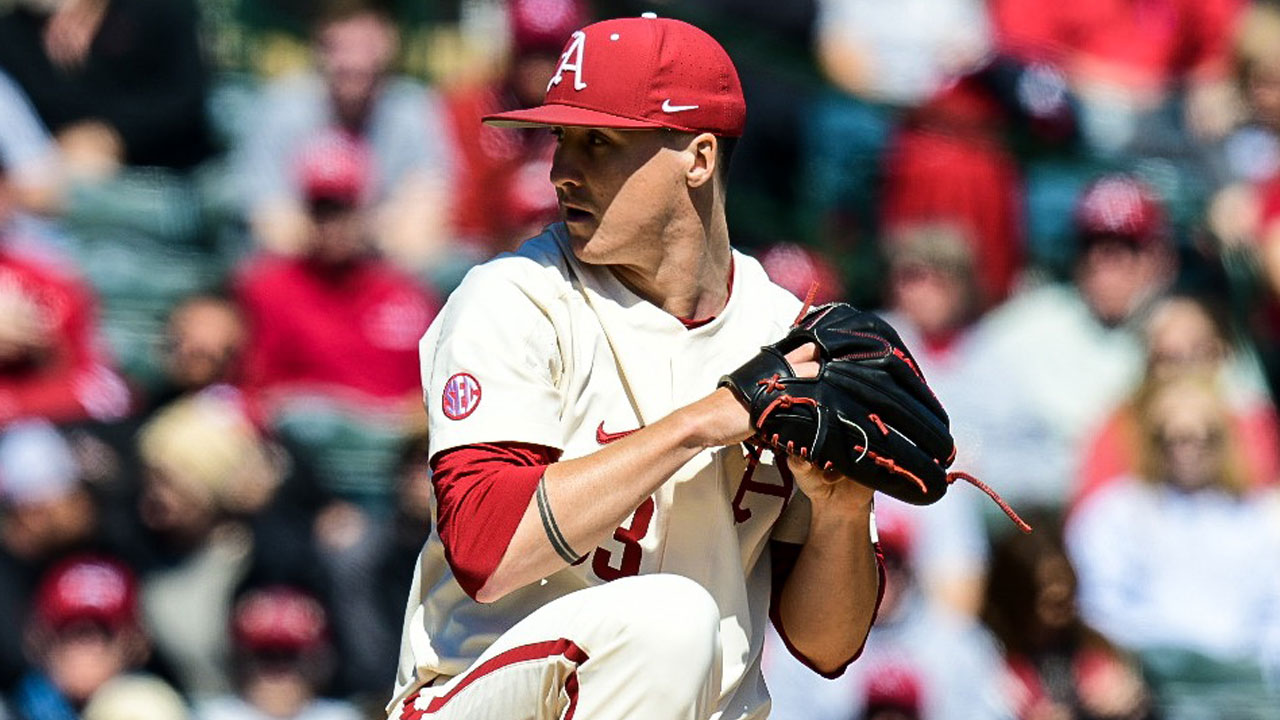 AUBURN, Ala. – The ninth-ranked Arkansas baseball team left no doubt Saturday afternoon as it used a great starting performance by freshman Patrick Wicklander and some key hits from Trevor Ezell and Heston Kjerstad to cruise to an 8-0 shutout over No. 15 Auburn, earning the series victory.

The series clincher comes less than 24 hours after Arkansas (24-8, 8-4 SEC) battled Auburn (23-9, 7-5 SEC) through 15 innings before it was the Hogs that came away with the 9-6 victory. Saturday’s win marked the Razorbacks third Southeastern Conference series victory and eighth conference win this season. The series win is Arkansas’ second-straight over Auburn and second at Plainsman Park since 2011. It was also Auburn’s first series loss at home this year.

It’s Arkansas’ fourth shutout of the year and second in SEC play. It’s also the third time the Razorbacks have scored eight or more runs and notched 10 or more hits in a shutout.

Eight of Arkansas’ nine starters recorded at least one hit in Saturday’s game. Kjerstad and Christian Franklin were the only hitters to have multi-hit performances. Ezell, Kjerstad and Jacob Nesbit all drove in two or more runs, while it was Ezell who took home top honors with a three-run home run in the fifth.

Wicklander Shines In First Career SEC Start
Freshman left-hander Patrick Wicklander hasn’t been a stranger to the starting role this year, but he was called on to take the hill Saturday in a must-win rubber match with 15th-ranked Auburn. After a long game the night before and a depleted bullpen, the freshman needed to give his team a good outing and he did so with five scoreless innings pitched and only three hits allowed. It was his third outing of five innings this year, matching his season high and fifth outing with five or more strikeouts. Auburn only managed a lead-off single off Wicklander in the first inning and did not get another hit until the fourth inning.

Ezell Plays Hero For Second-Straight Day
For the second-straight game, redshirt senior Trevor Ezell provided the big stick as he smashed his fifth home run of the year to straightaway centerfield in the fifth inning. The homer brought in three runs to add to the already 2-0 lead the Hogs built up in the third. Ezell finishes off a strong series against Auburn with just four hits, but six runs driven in, five off the long ball.

Bullpen Steps Up
The Razorback bullpen stepped up after Wicklander was relieved after the fifth inning. The combo of Cody Scroggins and Zebulon Vermillion gave up only three hits and one walk over the final four innings. Vermillion had his best outing of the year, going the final three innings with three strikeouts and picking up his first save of the year.

Razorback Quotables
“We did everything really well today. We pitched outstanding. (Patrick) Wicklander gave us five solid innings, threw a lot of strikes. He had a good fastball going and mixed in enough off-speed to keep them off-balanced. We put together three good innings where we put together a crooked number – a two-run, three and three, and got that good lead. (Cody) Scroggins gave us an inning and then Zeb (Vermillion) came in and gave us three innings. I couldn’t have asked for anything better from our pitching staff. Defensively, we made all the plays. I just thought we did a really good job altogether. In the last 24 hours I think this team grew up a lot, showed a lot of toughness and I’m really proud of them.” – Head coach Dave Van Horn on the series-clinching win over Auburn

“That was what we wanted – five innings. If he could have given us four, that would be OK, but five was the magic number for us. We felt like if we could keep it close or maybe have a lead after five that we could piece it together. We had a lot of guys volunteering and stepping up, and they all did their job.” – On what he wanted out of Patrick Wicklander today

“Both of them had a bunch of big hits, started innings and drove in runs. That was a big swing there in the fifth inning when we had two on and one out, and Ezell hit one out to dead center. At the time there was a light breeze blowing straight in and we didn’t think it was going out of the park. He kept it low and really drove it. That was a big swing.” – On the clutch hits this weekend from Heston Kjerstad and Trevor Ezell

Up Next
Arkansas returns home for a single midweek contest against Oral Roberts on Tuesday at Baum-Walker Stadium. First pitch is scheduled for 6:30 p.m. and will be televised on SEC Network+. The Hogs will hit the road again next weekend as it travels to Nashville to take on No. 3 Vanderbilt with a three-game series starting on Friday.