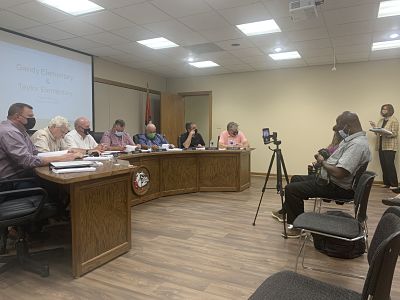 The White School District Board held its monthly meeting on Tuesday, September 14, and discussed ten agenda items. Among the matters approved were a five percent salary increase through ACT 1120 from the 2020-2021 school year and the required financial budget for the 2021-2022 school year, which must be submitted to the Arkansas Department of Education by September 30.

The board also recognized Gandy and Moody elementary schools for being selected for the National Assessment of Educational Progress (NAEP), an organization focused on literacy and math. Debbie Jones, from the district administration office, explained how those schools were selected and the purpose of NAEP.

Other items on their agenda included the administrator reports, such as an athletic update from Bobby Bolding, the district’s Athletic Director and the high school head football coach. The athletic report covered COVID-19 protocols followed by the majority of athletic departments, including if a team cancels a game due to COVID the team will have to forfeit that game. Forfeits count as a loss. He added the White Hall program will move players from different grade levels to join the team as replacements for athletes that comes in contact with COVID. Bolding also introduced a new system called Dragonfly that gives coaching staff quick access to important information for athletes.

The board requires each school in the district report its school improvement plan for the 2021-2022 school year. Both Gandy and Taylor Elementary school plans were presented by Principals Jaynie Cannon and Bill Tietz. Cannon spoke about all of the elementary schools literacy and math goals for both the ACT Aspire and STAR tests. The objective is to increase scores by 3% and create student intervention teams to facilitate improvement.