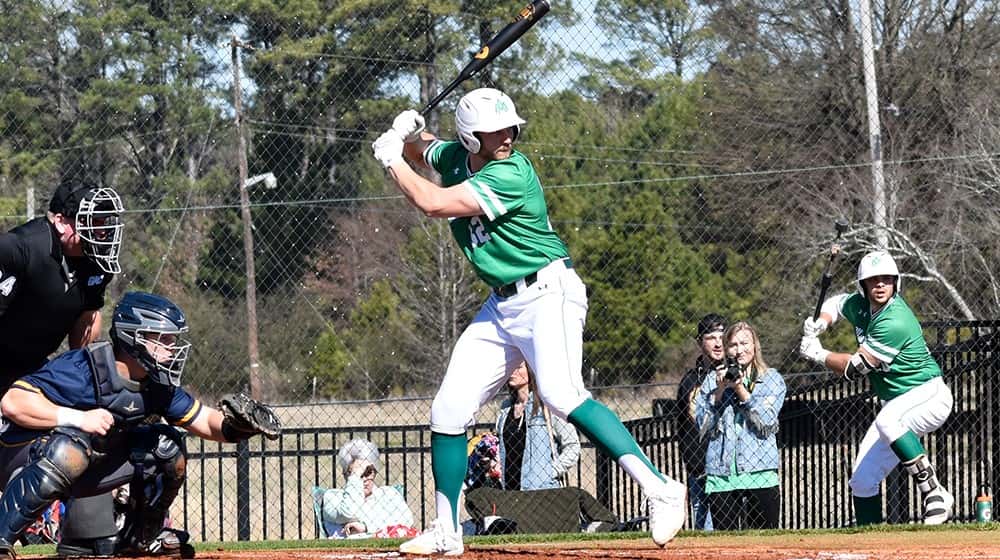 The UAM baseball team split its day two matchup with Ouachita Baptist on Saturday from Arkadelphia, Arkansas. After winning the first game on the day, 5-3, the Weevils fell in game two, 7-6. Jordan Johnson had another big day on offense tallying five RBI and a pair of homers in the two games.

ARKADELPHIA, Ark. – The University of Arkansas at Monticello baseball team split its day two matchup with Ouachita Baptist on Saturday from Arkadelphia, Arkansas. After winning the first game on the day, 5-3, the Weevils fell in game two, 7-6. Jordan Johnson had another big day on offense tallying five RBI and a pair of homers in the two games.

With the split UAM is now 6-7 overall and 4-2 in Great American Conference play.

GAME ONE: UAM 5, OBU 3
The Weevils rallied for a trio of runs late in the first contest including a big two-run homer by Johnson in the top of the ninth to put them ahead.

UAM did strike first in the game tallying a run on an RBI groundout from Andrew Piraino in the top of the first.

The following inning, the Weevils made it a 2-0 advantage when Grant Shepherd tripled to center allowing Audy Clary to score.

After Ouachita cut into the deficit with a run in the fourth, the Weevils added another run the top of the eighth of an Austin Powell single allowing David Reyna to score.

However, OBU tied it in the eighth to put the Weevils on their heels Johnson erased that in the ninth when his two-run tater gave UAM their 5-3 lead. They then shut the door in the bottom of the frame for the win.

Livan Cordova got the no-decision going 7.0 innings allowing one run on four hits and one walk while striking out six.

Derek Potts (W, 1-0) got the win going 1.1 scoreless innings walking one batter and striking out two.

GAME TWO: UAM 6, OBU 7
The Weevils had a lead through most of game two but squandered it late after OBU tacked on four runs in the fifth to help them earn a win.

To start, things seemed in UAM’s favor after Johnson opened scoring with a three- run homer in the top of the first inning.

OBU responded with a run in the bottom frame, but Hudson Hopkins helped get the lead back to three at 4-1 with an RBI double scoring Aaron Gaela. Piraino then singled to left allowing Hopkins to score making it 5-1.

Ouachita chipped into the lead with runs in the second and fourth making it 5-3.

Shepherd helped get the UAM lead to 6-3 with an RBI single, but the Tigers added four runs in bottom of the fifth to take a 7-6 lead. UAM could not score after that and they dropped the second contest

UP NEXT
UAM will play a non-conference game on the road on Wednesday at Christian Brothers University in Memphis, Tennessee at 1 p.m.

Razorbacks return to Sweet 16 with 53-48 win over Aggies