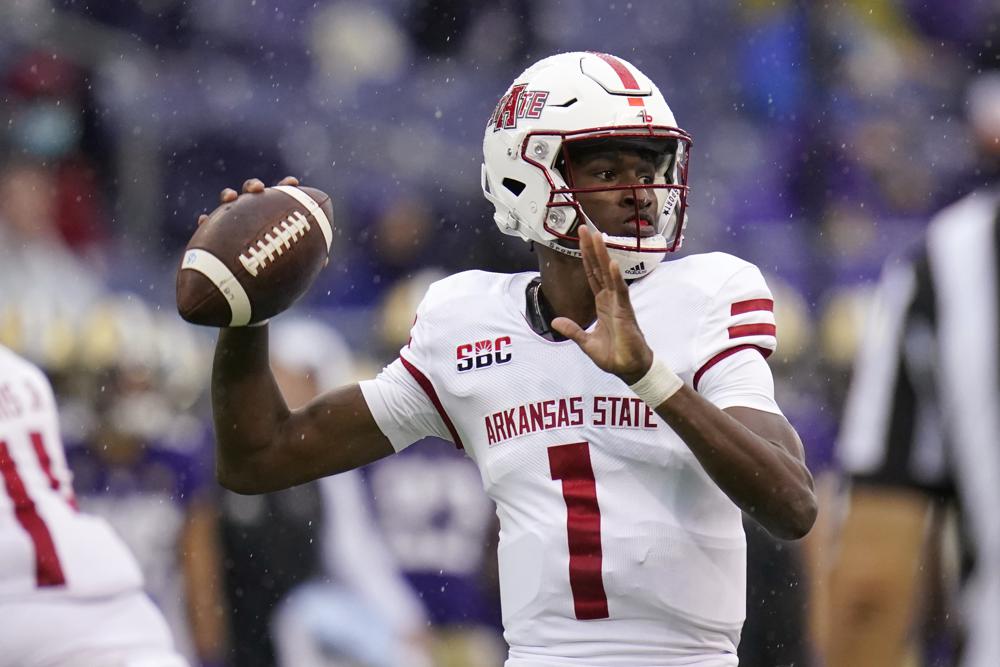 On a rainy afternoon at Husky Stadium, the Arkansas State football team dropped a 52-3 decision at Washington Saturday.

“(Washington) is a good football team, and any time you make mistakes it’s magnified against a quality opponent, just like last week,” head coach Butch Jones said. “I take full responsibility. It’s unacceptable, in all three phases – offense, defense and special teams. We made critical mistakes in critical stages of the game, critical plays on third and fourth downs. It’s just trusting what we see and executing our scheme. Right now, we have no discipline to execute. I believe in these players and I knew this was going to be a challenge, but we have to stay together and get better in a hurry. It’s my responsibility and we’re going to go back to work to get this rectified.”

A-State’s defense continued to display its ability to force turnovers, tallying three takeaways against the Huskies – two interceptions and a fumble recovery. The Red Wolves have now gained two or more turnovers in all three contests in 2021. Elery Alexander led all players with 10 tackles, including a forced fumble, and gained a turnover for the third straight game. Taylon Doss recorded a career-high eight tackles while Jeffmario Brown and Leon Jones recorded their first interceptions as Red Wolves.

James Blackman drew the starting nod under center, completing 16 of 38 passes for 176 yards. A-State totaled 220 yards through the air, as Layne Hatcher entered late, completing six of 11 passes for 44 yards. Lincoln Pare posted a career-best day receiving, hauling in seven catches for 69 yards to lead A-State in both categories.

Husky quarterback Dylan Morris completed 23 of 39 passes for 367 yards and three scores. Ten of those passes were completed to Jalen McMillan, who racked up 175 yards. The Huskies racked up 398 yards through the air, while churning out 200 yards on the ground.

Washington scored 28 unanswered in the first half on a pair of touchdown passes from Morris to Cade Otton (13 yards) and Jalen McMillan (33 yards) and rushing scores by Sean McGrew (13 yards) and Richard Newton (2 yards). The Huskies led 28-0 at intermission.

The Red Wolves kept the Huskies off the board in the second half until 4:37 left in the third, when McGrew plunged across the goal line for a 2-yard score. A-State then later got an interception by Jeffmario Brown to set up prime field position inside the Washington 30. The Red Wolves would not find the end zone, but a 26-yard field goal by Blake Grupe put them on the board to make it 35-3 after three. With his kick, Grupe moved into second all-time in program history in career points scored by kicking (290), passing Josh Arauco and is now third in most points scored in school history.

The Huskies closed out the contest with 17 fourth-quarter points. Morris found Terrell Bynum for a 42-yard score before Peyton Henry tacked on a 38-yard field goal. Washington’s last score came with 3:34 to go, when Bralen Trice returned a fumble recovery 72 yards for the touchdown.

Razorbacks fall to Auburn in Fayetteville