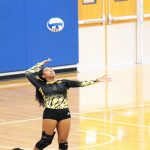 MEMPHIS, Tenn. – The University of Arkansas at Pine Bluff volleyball team dropped its final game of the Tiger Brawl Invitational hosted by University of Memphis, falling to Gardner-Webb 3-0 (17-25, 19-25, 21-25) at the Elam Roan Fieldhouse.

On the defensive side, freshman Darynne Bickers led UAPB with five block assistants. Gomez also was named to the All-Tournament team.

“We’ve got to start strong and finish the game”, said first-year UAPB head coach Chelsey Lucas.  “There were some mistakes we made as a team, but we’ll fix them and get better as the season goes on.”

The Lady Lions will return to action on the road to face the University of Arkansas Tuesday at 6 p.m. at Barnhill Arena.