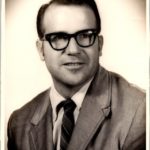 He was a member of the Rison United Methodist Church. He started his Civil Service career with the Pine Bluff Arsenal, Directorate of Biological Operations as a Research Entomologist. He retired from the Food and Drug Administration’s National Center for Toxicological Research ( NCTR) as a member of the Senior Executive Service after 40 years of Civil Service.

He attended and graduated from Rison High School. He received his Master’s degree from the University of Arkansas, Fayetteville where he was a member of the Kappa Sigma Fraternity.  He was selected Model Pledge of the Fraternity during his Freshman year.  He also was a member of the Marching 100 Razorback Band and was on the staff of the Arkansas Traveler college newspaper.

He was instrumental in the conversion of the Department of the Army’s Directorate of Biological Operations into the Food and Drug Administrations National Center for Toxicological Research (NCTR) and the location and construction of FDA”s Arkansas Regional Laboratory on the NCTR campus.

Memorials may be made to the Rison United Methodist Church, or the Our Promise at Genesis Cancer Center 133 Harmony Park Circle, Hot Springs, AR 71913.

Visitation will be Tuesday, March 17, 2020 at 1:00 pm, with funeral services following 2:00 pm at Rison United Methodist Church. Burial will follow in Greenwood Cemetery in Rison for immediate family.