Van Horn To Be Inducted Into Arkansas Sports Hall of Fame

Van Horn To Be Inducted Into Arkansas Sports Hall of Fame 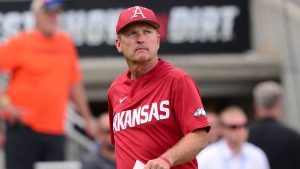 FAYETTEVILLE, Ark. – Arkansas baseball head coach Dave Van Horn will be inducted into the Arkansas Sports Hall of Fame next month the organization announced. Van Horn will be the sixth player or coach with Razorback Baseball ties to earn a spot in the hall of fame, joining Coach Norm DeBriyn and players Kevin McReynolds, Melvin McGaha, Tom Pagnozzi and Cliff Lee.

Van Horn will be honored on Jan. 25 at the Fayetteville Town Center as part of a special ceremony to make him part of the 2019 induction class. A reception begins at 5 p.m. with the banquet starting at 6 p.m. Tickets and sponsorships for the event may be purchased by visiting the Arkansas Sports Hall of Fame website or by calling 501-313-4158.

Entering his 17th year as head coach of the Razorback Baseball program, Dave Van Horn has continued to elevate Arkansas into one of the nation’s premier teams year in and year out. Over his 16 seasons as head Hog, Van Horn has led Arkansas to five College World Series appearances, 15 NCAA Tournament berths, one Southeastern Conference overall title, four SEC Western Division championships and a total of 643 wins, averaging more than 40 wins a season.

Ever since returning to his alma mater in 2003 to take over for retiring SEC legend Norm DeBriyn, Van Horn has continued to successfully field nationally competitive teams, while also grooming numerous All-Americans, all-conference and future Major League players.

Under his guidance, 24 Razorbacks have been named All-Americans, 33 as All-SEC players, and 101 have been picked in the MLB Draft. Those draft picks are the third-most among all active head coaches in the SEC.

Van Horn is the second-winningest coach in Arkansas history with 643 wins entering the 2019 season. Last year, with a win at San Diego State, Van Horn became only the second active head coach in the SEC with 600 or more wins at their current school.

The highly decorated coach has both individual and team honors throughout his 30-year coaching resume, beginning at Texarkana (Texas) Community College all the way through the present. Individually, he has been named national coach of the year twice, regional coach of the year twice and conference coach of the year four times. His teams have made seven College World Series appearances, tying for the second most among all active head coaches, won five outright conference championships, a Division II National Championship and made 18 trips to the NCAA Tournament in the last 19 years. Van Horn is one of only 11 coaches in NCAA history to lead two programs to the College World Series.

Van Horn and the Razorbacks are continuing to prep for the 2019 and will face Eastern Illinois on Feb. 15 for Opening Day. First pitch is scheduled for 3 p.m. and tickets are available at the Razorback Ticket Office.

Stick to sports? Here’s what could happen to Olympians who protest at Tokyo Games