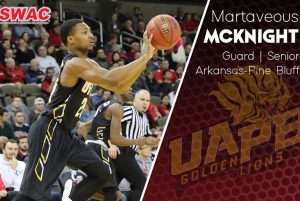 Golden Lions picked to finish 3rd in SWAC
BIRMINGHAM, Ala. – Grambling State has been picked to finish first in the 2018-19 Southwestern Athletic Conference (SWAC) men’s basketball standings in a preseason poll conducted by the conference office from the league’s head coaches and sports information directors. The announcement was made by the SWAC during its annual media teleconference call on Thursday.

The Tigers finished the 2017-18 season strong with conference best marks of 17-14 overall and 13-5 in conference play to earn the program’s first regular season championship since the 1988-89 season. Reigning SWAC Coach of the Year Donte Jackson returns to the bench for his second season.

Following close behind for a projected second place finish is Texas Southern, a program that has won the SWAC Championship in four of the previous five seasons and earned a 64-46 play-in round victory against North Carolina Central in the 2017 NCAA Tournament in Dayton, Ohio.

Arkansas-Pine Bluff, who vastly exceeded preseason projections last season, was selected to finish in third place after topping Mississippi Valley State and Southern in last year’s SWAC Tournament to reach the Championship game. Prairie View A&M, a semifinalist from a year ago after defeating Alcorn State in a quarterfinal before falling to Texas Southern, was slotted fourth while Alabama State has been selected to finish in fifth place. Rounding out the poll includes: Southern, Alcorn State, Jackson State, Mississippi Valley State and Alabama A&M.

2018-19 All-SWAC Preseason Men’s Basketball Team
Returning for his senior campaign, Arkansas-Pine Bluff guard Martaveous McKnight was named the SWAC Preseason Men’s Basketball Player of the Year. McKnight ranked third in the conference in scoring, averaging 18.6 points per game, was eighth in field percentage at 45.7%, fourth in assists at 3.6 per contest, third in steals per game at 1.9 per contest, ninth in 3-point percentage at 36.4%, seventh in 3-pointers made at 1.9 per game, fifth in assist to turnover ratio at 1.4, eighth in defensive rebounds per game at 3.9 and was ranked third in minutes with an average of 33.4 minutes logged per game.

The Walls, Miss. native scored in double figures in 22 games and had at least once steal in all, but three of his games played. He had 16 games in which he made at least two 3-pointers and eight games in which he had at least five assists. McKnight led the Golden Lions to their first championship game appearance since 2010 and finished with four game-winning buckets in SWAC play.

The SWAC Preseason Defensive Player of the Year award went to Texas Southern redshirt senior center Trayvon Reed. A near unanimous selection, the 7-foot-2 Reed averaged a conference-best three blocks per game, was tied for first in rebounding with 8.8 per game, was first in defensive rebounds per game (6.2), was second in field goal percentage at 68.4%, and was ranked 22nd in scoring at 9.7 points per contest. The Mobile, Ala. native was instrumental in protecting the net and helping the Tigers to a fourth title in the previous five seasons. Joining McKnight and Reed on the All-SWAC Preseason First Team were guard Ivy Smith Jr. (Grambling State), and forwards Charles Jackson (Arkansas-Pine Bluff) and Dante Scott (Mississippi Valley State).

In an event that a player was named to the First Team during the postseason and does not return, the second team player for that position was elevated to the First Team. Players were ranked in their position based upon the number of votes received by the conference’s head coaches and sports information directors.