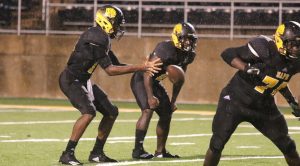 New Orleans native has come up big for UAPB in absence of JUCO All-American Shannon Patrick
CHICAGO, Ill. – Nine freshman players who have carved out a niche during the college football season were recently nominated to the STATS FCS Jerry Rice Award Watch List, including University of Arkansas at Pine Bluff Golden Lions freshman quarterback Skyler Perry, who took over the helm when junior college All-American quarterback Shannon Patrick went down with an injury early in the season after torching opposing defenses.

The Rice Award, named after the legendary Hall of Fame wide receiver, has been presented in the postseason to the FCS freshman player of the year since 2011.

Still a young award, the Rice award is distinguished, with three of the first four recipients to complete their college careers playing in the NFL: former Towson running back Terrance West, Eastern Washington wide receiver Cooper Kupp and Fordham running back Chase Edmonds.

A national panel of over 150 sports information and media relations directors, broadcasters, writers and other dignitaries will vote on the award following the regular season.

List of some businesses in Deltaplex closed due to weather