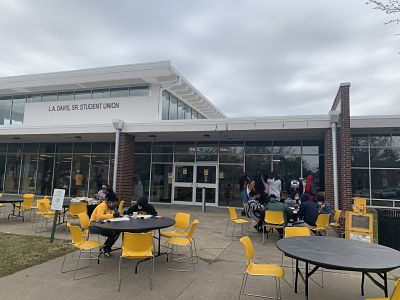 The University of Arkansas at Pine Bluff Union Programming Board hosted one of their annual ‘Trap n Paint’ events for the first time this semester on Wednesday afternoon in front of the L.A. Davis Student Union building.

The advisor for the Union Programming Board Courtney Jackson-Mcghee further explained the event,

Jackson also mentioned that students were not able to take in-person classes until March which is why they have now decided to begin hosting events for the campus. He went on to address the future events they have planned this semester,

As mentioned before, the Union Programming Board is also hosting a Unity Fest on campus Thursday afternoon. These events are stepping stones for the University as they slowly but surely work towards normal campus operations.