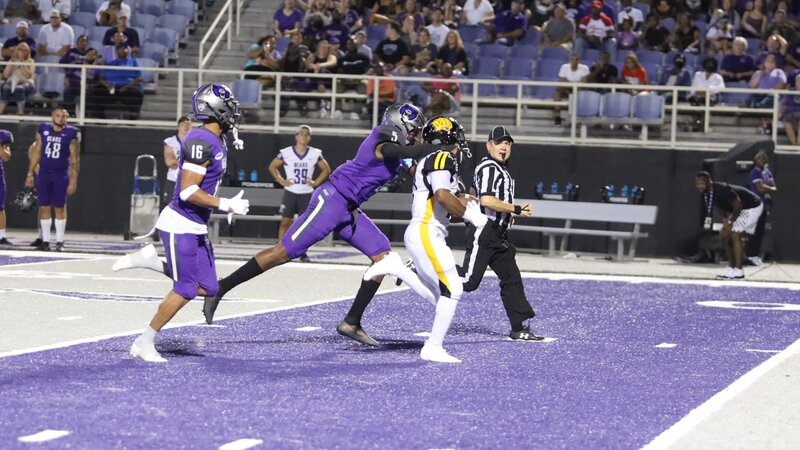 CONWAY, AR – The University of Arkansas at Pine Bluff football team came up short against the Central Arkansas Bears with the final score of (45-23), Saturday night at Estes Stadium.

Looking to pick up where they left off and make the progression from their season opener, the Golden Lions had one goal in mind: to defeat UCA.

However, UAPB could not get an early start on the defensive end, but the offense would get things going, attacking and finding the gaps against the Bears.

UCA jumped out to a (21-0) lead before UAPB responded with a 29-yard field goal from Zack Piwniczka to put the score at (21-3) with less than four minutes in the first half.

A 30-minute lightning delay then took place, allowing the Golden Lions to go in the locker room and make adjustments. With 2:26 left to go, RB Kierre Crossley would make a seven-yard run to get into the endzone for the Golden Lions and finishing the first half down (28-9).

Second-year UAPB head coach Doc Gamble understood what needed to be done in the second half to succeed against Central Arkansas. “We knew we had a way to go and minimize the mistakes and missed assignments,” said Gamble about his halftime speech to his team.

UAPB out rushed UCA on the ground attack 135-127. Crossley leads all rushers with seven carries for 82 yards and two touchdowns.

On the receiving end, WR Dejuan Miller finished the night with four catches for 71 yards, followed by WR Josh Wilkes with three catches for 69 yards.

On the defensive side, All-Conference FS Jalon Thigpen finished the night with 12 tackles and two breakups, followed by LB Timon Akins with eight tackles.

With a mindset to come back from the deficit, the Golden Lions knew it wouldn’t be easy. Already scoring a touchdown in the first half, Crossley was not satisfied. Perry would collect 12 rushing yards to get the football within two yards. Crossley would then convert for two yards for his second touchdown of the night, to cut the deficit (31-16) with a Piwniczka field goal to follow.

In the following play, DB Andre Fuller would intercept a UCA pass from the Bear’s 49-yard line and return for an electrifying 49-yards into the UAPB endzone for a touchdown and cutting the Bear’s lead to eight, (31-23).

UAPB tried to rally back before, UCA scored two fourth-quarter touchdowns, allowing Central Arkansas to seal the victory with a final score of (45-23).

“We have to go back to the board and refocus and get our guys healthy for SWAC play,” said Gamble on how the team will bounce back from the loss to UCA.

The Golden Lions will return to their home turf for their first game of SWAC play on Thursday against Alcorn State for Community and Greek Night at Simmons Banks Field. You can watch the marquee matchup live on ESPNU at 6:30 p.m. or listen live on UAPB Sports Network or 99.3 The Beat.