The Road To The College Cup Begins In Fayetteville

The Road To The College Cup Begins In Fayetteville 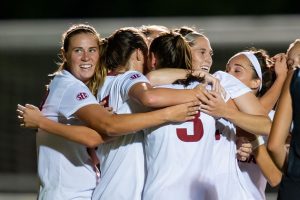 FAYETTEVILLE, Ark. — The Razorback soccer team continues its season this Friday as it set to play its first-round match of the 2018 NCAA Tournament against Sun Belt tournament-champion Little Rock at Razorback Field. First kick is slated for 7 p.m. and will be televised on SEC Network+.

Tickets for the match can be purchased online through the Razorback Ticket Office throughout this week or in person at Razorback Field 90 minutes prior to kickoff. Gates will open for the public one hour prior to kickoff on Friday.

Arkansas (13-4-4, 6-3-1 SEC) is coming off a third-straight SEC Tournament final appearance and is looking to continue playing its best soccer in the postseason. Since Colby Hale became the head coach, the Razorbacks have played in five of the last six NCAA Tournaments, which are its only appearances in school history.

This Friday’s match will also mark the second time in school history that Arkansas has hosted the first round of the NCAA Tournament, the last coming in 2016. That year, Arkansas defeated Memphis, 2-1 in overtime, to advance to the second round.

Arkansas’ best finish in the NCAA Tournament came in 2013, where it reached the Sweet 16 in its first tournament appearance in program history before falling to Duke, 5-3 on penalty kicks, after battling to a 2-2 draw after 110 minutes of play. Since then, the Razorbacks have reached the second round two out of three times.

This year, as winners of four of its last seven matches, Arkansas brings in one of the strongest and well-balanced offensive units in the country. Combined, juniors Kayla McKeon, Tori Cannata, Stefani Doyle and sophomore Taylor Malham have combined for 23 of Arkansas’ 38 goals this year, including four of the last six.

McKeon and Cannata lead all Razorbacks with eight goals each, while Malham has quietly put together a strong campaign with five goals and eight assists for 18 points.

Malham scored Arkansas’ only goal in the 1-1 draw with LSU last week in the SEC Tournament final, but led all Razorbacks with two goals in the conference tournament. Through her first two years on campus, Malham has already racked up 11 goals, 10 assists and started in 45-consecutive matches, which is the second-longest streak on the team (68 by Stefani Doyle).

Doyle is the only current Razorback to have recorded a point in NCAA Tournament play. She scored Arkansas’ only goal in a 4-1 loss to NC State in the first round of the 2017 NCAA Tournament last year.

Quick Kicks
>> Making it’s fifth appearance in the last six years, Arkansas earned its third-straight berth in the NCAA Tournament and will face Sun Belt Tournament-champion Little Rock in the first round on Friday.

>> Arkansas will also be hosting the first round of the NCAA Tournament for the second time in program history. Arkansas last hosted the first round in 2016 when it beat Memphis, 2-1, in overtime.

>> In three of its last four prior appearances in the NCAA Tournament, Arkansas has made it to the second round, earning wins over Oklahoma State (2013), Oklahoma (2014), and Memphis (2016).

>> All five of Arkansas’ NCAA Tournament appearances have come under head coach Colby Hale. Arkansas had never made the tournament field prior to 2013 when Hale became head coach.

>> The Razorbacks reached the Sweet 16 in 2013, its first-ever tournament appearance, defeating Oklahoma State, and St. John’s before falling to Duke in penalty kicks.

>> Since Colby Hale became the head coach in 2013, Arkansas has only missed the NCAA Tournament one time.

>> Arkansas is coming off its third-straight SEC Tournament final appearance. After solidifying a four-seed in the conference tournament, the Razorbacks defeated Ole Miss and Florida for their 12th and 13th wins of the season.

>> Juniors Kayla McKeon and Tori Cannata continue to lead the way in the goals and points category on the team. Both scored once during the three-match run of the SEC Tournament and have 21 and 18 points, respectively.

>> McKeon set a career-high and tied the school record with three assists in the 4-0 quarterfinal win over Ole Miss last week. McKeon has tallied five points in her last three matches and was named to the SEC All-Tournament Team. Since being named the starting goalkeeper, redshirt sophomore Taylor Beitz has racked up six shutouts in 11 starts. She has the fifth-lowest goals against average (0.86) in the SEC.