The surviving members of Soundgarden reunited in the studio last fall for a Record Store Day 2020 EP with Brandi Carlile. Kim Thayil, Ben Shepherd and Matt Cameron were on hand to record new versions of the band’s 1994 smash, “Black Hole Sun”, and 1991’s “Searching With My Good Eye Closed”; they’ll be featured alongside Carlile’s own “A Rooster Says,” which will be released on September 26.

Carlile was also joined by frequent collaborators, twins Phil and Tim Hanseroth. “The twins and I met in the late 90’s in a famous Seattle studio called London Bridge,” explained Carlile. “The guy in the picture with me is Rick Parasher (RIP) and he introduced us. Soundgarden were just gods to us back then. Total pioneers and unreachable to us in every way. We went about making our demos and cleaning the studio when we couldn’t afford the bill never knowing that in November of 2019 we would go back to London Bridge and RECORD TWO SONGS WITH THEM!!

“@chriscornellofficial was as great as a human singer can get and now he’s an angel. Thank you Kim, Ben, and Matt. I’ll never forget this day for as long as I live…. stay tuned!!” 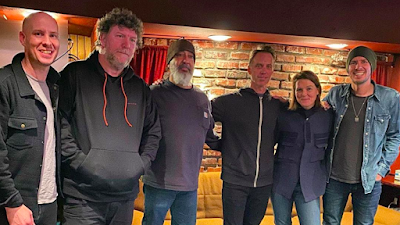 Via feedproxy.google.com
The surviving members of Soundgarden reunited in the studio last fall for a Record Store Day…
06/04/2020 2:00 PM