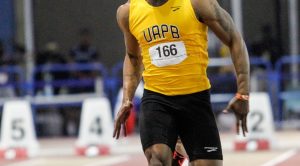 Arlington, TX. – The University of Arkansas at Pine Bluff men’s and women’s track and field team had a strong showing in the Bobby Lane Invitational held in Arlington, Texas Saturday evening.
On the women’s side, In the 100-meter hurdles Freshman Safiya John placed second  with a time of 14.16, followed by Arjai Johnson in third place with a time of 14.90 and Jyzmin Gray in fifth with a time of 15.09.
Camiya Knight crossed the finish line in second  place in the 400 meters with a time of 58.00 and Je-Risa James in fourth  with a time of 59.90.    Also in the 400-meter hurdles Gray and Johnson finished in the top five respectively with a time of 105.07 in fourth place and 105.31 in fifth place.
The Lady Lions (Knight, John, James, and Gray) claimed the silver in the 4×400 meter relay with a time of 4:02.48.
In the field events, UAPB Lady Lions continue to make a strong impression in the women’s event.
Sabrina Hollins PR twice in her events, starting in the hammer throw, placing fourth with a distance of 48.83m.  Keziann Jones also finished in third with a range of 50.27m.  Hollins broke her school record in the women’s discus throw with a distance of 49.69m to claim first  place in the event.
Besides Hollins record breaking in the discus event, UAPB had two other student-athletes to round out the top five, Joelle Stewart fourth with a distance of 38.88m and Jasmine Stewart fifth with a range of 37.79m.
In the shot put competition, Jones claimed second  place with a throw of 13.38m, followed by Stewart in fourth with a throw of 11.98m and Hollins in fifth with a throw of 1194m.
Cedreahna Kennedy placed third  in the javelin throw, along with Safiya John winning the triple jump with a leap of 11.60m and taking silver in the long jump with a leap of 5.34m.

Both squads will be back in action March 28-30th in the Texas Relays held in Austin, Texas.

Allyson Felix qualifies for fifth Olympics, celebrates with her 2-year-old daughter on the track