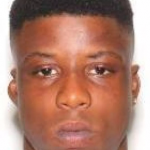 One suspect accused of breaking-in a Jefferson County Sheriff’s Office sergeant department-issued vehicle has been identified.

Kendrick Stafford Johnson, 23 and at least two other accomplices not yet identified are wanted for breaking or entering and felony theft charges after breaking into an unmarked vehicle registered to the Jefferson County Sheriff’s Office.  At the time the theft occurred, the vehicle was parked at a private residence.  Johnson and his accomplices are accused of stealing an X26P Taser, duty belt, and two .40 caliber Glock ammunition magazines from the vehicle.

Investigators assigned to the Criminal Investigation Division of the Jefferson County Sheriff’s Office traveled to 1105 E. 26th Avenue, Apartment 14H in Pine Bluff, AR., where they conducted a search of the property. During the search, investigators recovered a X26P Taser.  Investigators also discovered drug paraphernalia and recovered a 9-millimeter semi-automatic pistol, .22 caliber revolver, and two .40 caliber Glock ammunition magazines.  The 9-millimeter pistol was linked to a theft believed to have occurred just hours after Johnson and his accomplices broke into the sergeants’ vehicle.

A further search netted the discovery of a credit card and driver’s license belonging to a victim linked to yet another theft that occurred just hours after Johnson and his accomplices broke into the sergeants’ vehicle. This investigation is on-going and other arrests are forthcoming.