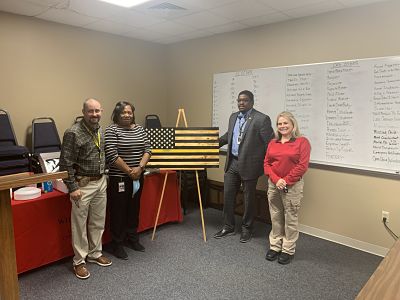 This week is Public Safety Telecommunications Week which highlights the role that 9-1-1 MECA professionals play in providing emergency services for the citizens of Pine Bluff. The Jefferson County Sheriffs department, Jefferson County Judge Office, and others extended donations and hosted a celebration to show their appreciation for all that the 9-1-1 personnel contribute.

The event was led by Operations Manager Doris Taggart, Sheriff Lafayette Woods Jr. with the support of the operations commander Major Gary McClain and other prominent members of the Sheriff’s Department. Sheriff Woods Jr. spoke on the behalf of the Sheriff’s department and gave his thanks,

Sheriff Woods Jr. presented a plate with the telecommunications and radio dispatch operations flag as a token of reminder that the Jefferson County Sheriff’s Office and the men and women in the county support all that they do.

Arrest made in June 7 murder