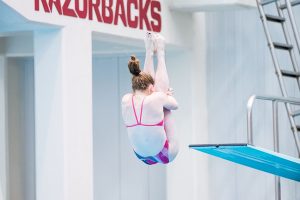 The event was Schultz’s first of three and only paired event.

The duo took on four other pairs of divers, with North Carolina and Nevada among the schools represented.

In the preliminary round, Schultz and Bromberg placed first with a score of 267.00. Placing in the top-two of four out of five dives, the pair was 5.28 points ahead of the second-place team.

Schultz and Bromberg dominated in the final round, earning a score of 555.00 and earning top-two finishes in all five dives. The pair was 13.11 points ahead of the second-place team.

Schultz will dive in two more events, competing in the 1-meter on Thursday and the 3-meter on Friday.