PINE BLUFF SET TO HOST RETURN OF THE TRIBE

Source: This article is being republished from an article in the Arkansas Business written by George Waldon

When Arkansas voters approved Issue 4 on Nov. 6, they set in motion what some Pine Bluff boosters see as a much-needed cloudburst of prosperity headed their way. Now known as Amendment 100, the change in law opened the doors to the coming arrival of the Quapaw tribe’s $350 million Saracen Casino Resort.

“This almost is the equivalent of having 1,000 jobs dropping out of the sky on us,” said Caleb McMahon, director of economic development for Jefferson County. 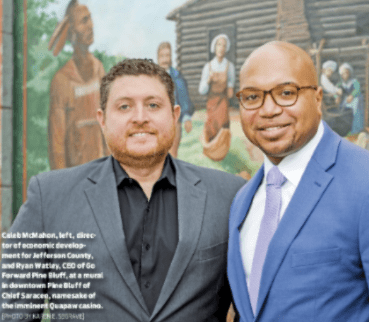 The casino development represents a future entry among the county’s top five employers, where only four top the 1,000 mark: Jefferson Regional Medical Center at 1,575, Tyson Foods at 1,500, Arkansas Department of Correction at 1,430 and Evergreen Packaging at 1,040.

The workforce at Saracen Casino Resort could exceed the headcount at Evergreen’s paperboard mill. “We’re thinking it will be north of that, eleven hundredish,” said John Berrey, chairman of the Quapaw Tribe of Indians.

The required letters of local political support to gain a license from the state are already in hand. The Arkansas Racing Commission is required to set rules for the state’s new casino gaming structure by no later than March 14. No license application can be submitted until the rules are finalized.

While the bureaucratic process continues to churn, construction momentum is building.

The future location of the Pine Bluff casino at the southeast corner of the Martha Mitchell Expressway and U.S. 63-79 is something of an open secret. Land assembly for the 300-acre site east of The Pines Mall was completed in December. 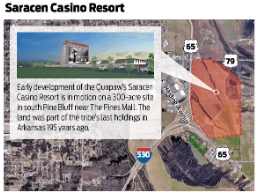 Berrey remains optimistic that the 70,000- to 80,000-SF casino portion of the development can be completed and open before the end of the year.

Completion of the 350-room hotel, conference space, entertainment venue, spa and restaurants would follow in 2020. The project will incorporate museums devoted to the history of the blues, Native Americans and African-Americans in the Jefferson County area.

“We built Downstream in record time,” Berrey said. “Our expectation is we will do the same here.”

The tribe’s way of doing business and their Downstream Casino Resort provide a promising template to replicate in Pine Bluff.

“This group has been amazing to work with,” McMahon said. “They’re really in it for the right reasons and trying to do right by everyone involved.

Across the 75 counties in Arkansas, the casino amendment passed by a 54.1 to 45.9 margin. Jefferson County voters embraced the prospect of hosting a casino more heartily than most, posting a 64.5 to 35.5 margin in favor.

That strong showing at the polls didn’t surprise McMahon, given the community interaction with Quapaw representatives he’d seen.

“All the meetings with local people here were all very supportive from the very beginning,” he said. “And they were full steam ahead, and we got the result we wanted.”

Only three counties expressed more voter support for the casino gambling measure than Jefferson: Crittenden at 66.2 percent, Mississippi at 65.43 and Chicot at 64.6 percent. 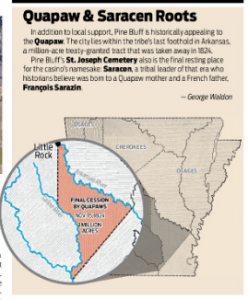 The local outcome at the polls doesn’t mean the temperature has cooled safely for the political hot potato presented by gambling.

But they didn’t want to talk about the project. Both declined comment for this article.

In addition to jobs, the Saracen Casino Resort will inject new revenue into state, municipal and county coffers as well as fattening the purses for horse racing in Hot Springs and greyhound racing in West Memphis.

Any casinos resulting from Amendment 100 are required to pay taxes to the state, 13 percent on the first $150 million of net casino gaming receipts and 20 percent on receipts above $150 million.

This money will be divvied between the state’s general fund, 55 percent, and the Racing Commission, 17.5 percent earmarked to use for purses for live horse racing and greyhound racing.

In the case of Saracen tax revenue, the balance would be split between Pine Bluff, 19.5 percent, and Jefferson County, 8 percent.

“The casino hopes to increase what we hope to do, which is to increase the tax base,” said Ryan Watley, CEO of Go Forward Pine Bluff. “It is a game changer.”

Saracen Casino Resort is viewed as a southern anchor for economic renewal in Pine Bluff to connect with the revitalization efforts downtown.

“It’s synergistic from our point of view,” Watley said. “It puts the pressure on us to accomplish more, and it couldn’t have come at a better time to have that kind of investment.

“We’ve done a lot, but we have so much more to do to be successful.”

Casino taxes in June over $1.822 million