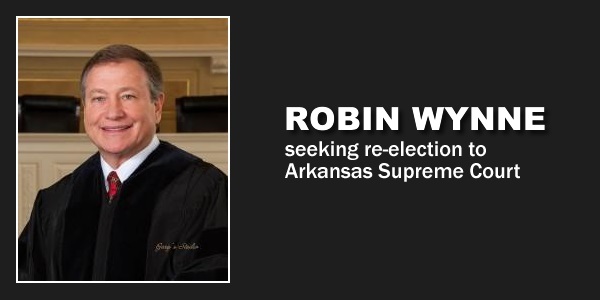 In response to his announcement to the public, Justice Wynne said in a news release, “I have enjoyed serving on the Supreme Court and hope the people of Arkansas will elect me to a second term,” and added, “I believe my nearly twenty years of experience as a judge, combined with my time in private practice in Fordyce, allows me to bring a unique perspective to my service on the Court. I feel it is important for Judges to be elected and I look forward to having the opportunity to visit with the people of Arkansas about my commitment to them and the judicial system.”

According to sources Wynne, 68, has a lengthy resume including his time served as a judge on the Arkansas Court of Appeals from 2011 until 2014, a district judge in Dallas County from 2004 until 2010, Fordyce City Attorney from 1989 until 2004, deputy prosecuting attorney for the 13th Judicial District from 1989 until 1998, and Arkansas State Representative from 1985 until 1988. He has been an adjunct professor at the UALR Bowen School of Law since 2012.