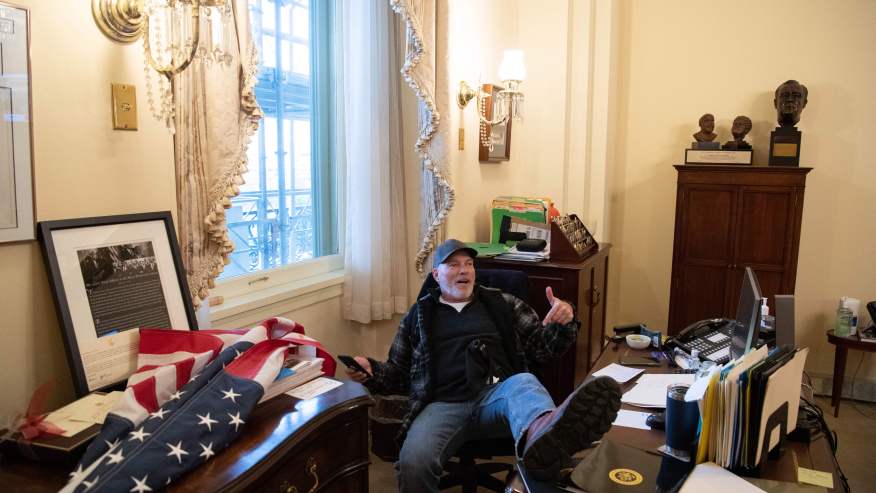 TOPSHOT - A supporter of US President Donald Trump sits inside the office of US Speaker of the House Nancy Pelosi as he protest inside the US Capitol in Washington, DC, January 6, 2021. - Demonstrators breeched security and entered the Capitol as Congress debated the a 2020 presidential election Electoral Vote Certification. (Photo by SAUL LOEB / AFP) (Photo by SAUL LOEB/AFP via Getty Images)

WASHINGTON (KNWA/KFTA) — A man photographed inside Rep. Nancy Pelosi’s office during protests in Washington D.C. is from Northwest Arkansas.

This Getty Image photo is going viral after today’s protest.

The KNWA & FOX24 team immediately recognized the man, who is from Northwest Arkansas. Members of the Benton County Republicans also identify the man in this photo as Richard Barnett.

We spoke to Barnett back in November during a stop the steal rally in Bentonville. He supports President Trump’s claims of voter fraud and believes that cost him this election.

Another journalist in Washington, D.C. snapped a photo of Richard outside the Capitol, claiming to have taken a letter from Pelosi’s desk.

This is Robert “Big O” Burnett. He took a letter from @SpeakerPelosi’s desk after storming the #USCapitol pic.twitter.com/TiDF1Wl9Tq

A New York Times reporter spoke to Barnett outside the Capitol. In a profanity-laced statement, he told the Times reporter he left Pelosi a note on her desk, along with a quarter, “even though she ain’t ******* worth it.”

Rep. Steve Womack, who represents the area of Arkansas where Barnett lives, took to social media to say he was “sickened” to find out that the protester was one of his constituents, adding that the man “must be held accountable and face the fullest extent of the law.”

I'm sickened to learn that the below actions were perpetrated by a constituent. It's an embarrassment to the people of the Third District and does not reflect our values. He must be held accountable and face the fullest extent of the law. This isn't the American or Arkansas way. https://t.co/kSsA6LxdM8

Asian man stabbed in back in Chinatown, suspect charged with attempted murder as a hate crime