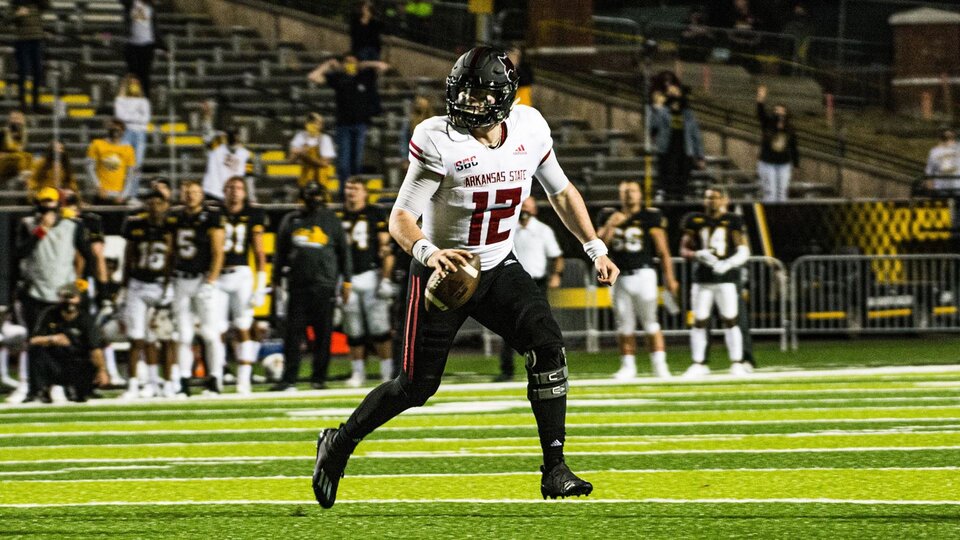 BOONE, N.C. (10/22/20) – A 31-7 halftime deficit was tough to overcome for Arkansas State, as it dropped a 45-17 decision at Appalachian State Thursday night at Kidd Brewer Stadium.

The Red Wolves (3-3, 1-2 Sun Belt Conference) allowed 24 unanswered to end the first half and, despite trimming the deficit to 14 in the third quarter, could not get past the Mountaineers (3-1, 1-0). App State out-gained A-State 521-to-368 in the contest, including churning out 305 yards on the ground. The Scarlet and Black found most of its production through the air to the tune of 295 yards, but it was the ground game that found the end zone.

“Obviously not how we wanted it to go,” head coach Blake Anderson said. “We knew they were a good football team with a lot of veterans. They’re really big and physical on both fronts, and that’s where it started and ended today. They owned both lines of scrimmage and we knew that was something that we were going to have to do a better job than we have the last couple of weeks.

“I’m really proud of how they battled in the second half – our goal was to win the second half and we came up a little short on that. To get stops and continue to play, we have to build off that. It gives us a chance to keep getting better and we still control our own destiny. We just have to play better than we did tonight.”

Jonathan Adams, Jr. was once again a threat for A-State, hauling in six catches for 134 yards as the game’s leading receiver. Dahu Green, Brandon Bowling and Reed Tyler all caught three while Jamal Jones caught two. Five other players caught passes on the night for a total of 10 different pass-catchers for the Red Wolves.

A-State’s quarterbacking tandem of Logan Bonner and Layne Hatcher combined to complete 22 of 41 passes for 295 yards and an interception. Jeff Foreman also fired a pass, but it was intercepted. On the ground, the Red Wolves scored twice with touchdowns by Jamal Jones and Lincoln Pare, but only managed to manufacture 73 yards. Pare was the team’s leading rusher with 46 yards on five carries while Ryan Graham had seven carries for 37 yards.

For the Mountaineers, Zac Thomas completed 16 of 23 passes for 216 yards and four scores while also being a threat on the ground with 82 yards on seven carries, including a 60-yard scamper. Daetrich Harrington was the game’s top rusher with 137 yards on 18 attempts. Malik Williams was the top receiver for App State, grabbing six catches for 78 yards and a score. Christian Wells also caught a pair of Thomas’ touchdown tosses.

Defensively, CJ Harris led the way with eight tackles (two for loss) while TW Ayers tallied the lone sack. A-State’s defense forced three fumbles, recovering one. The Mountaineers got a game-high nine tackles each from Shaun Jolly and Trey Cobb, with D’Marco Jackson nabbing a pair of interceptions.

App State struck first when Thomas connected with Wells on a 46-yard strike, but the Red Wolves evened things at 7-7 on an 8-yard rush up the middle by Jones. On the next drive, the Mountaineers reclaimed its lead on a 55-yard run by Harrington to end the first quarter with a 14-7 lead.

The Mountaineers then opened the second quarter with a five-yard scoring toss from Thomas to Mike Evans to cap off a lengthy 17-play drive and make it 21-7. The scoring drive ate up six-and-a-half minutes of clock between the late first and early second quarter.

After Blake Grupe missed a 24-yard field goal try, A-State regained possession on a fumble recovery by Booker Ficklin at the end of a 39-yard rush by Marcus Williams, Jr. Elery Alexander punched the ball free, after which Ficklin fell on it at the Red Wolves’ 27. A failed fake punt attempt then turned the ball back over to the Mountaineers, who stretched their lead out to 24-7 on a 39-yard field goal by Chandler Staton with 4:39 left in the half.

Appalachian State added another touchdown with just over a minute left in the half when Thomas found Malik Williams for a 16-yard score. After 24 unanswered points, the Mountaineers led 31-7 at halftime.