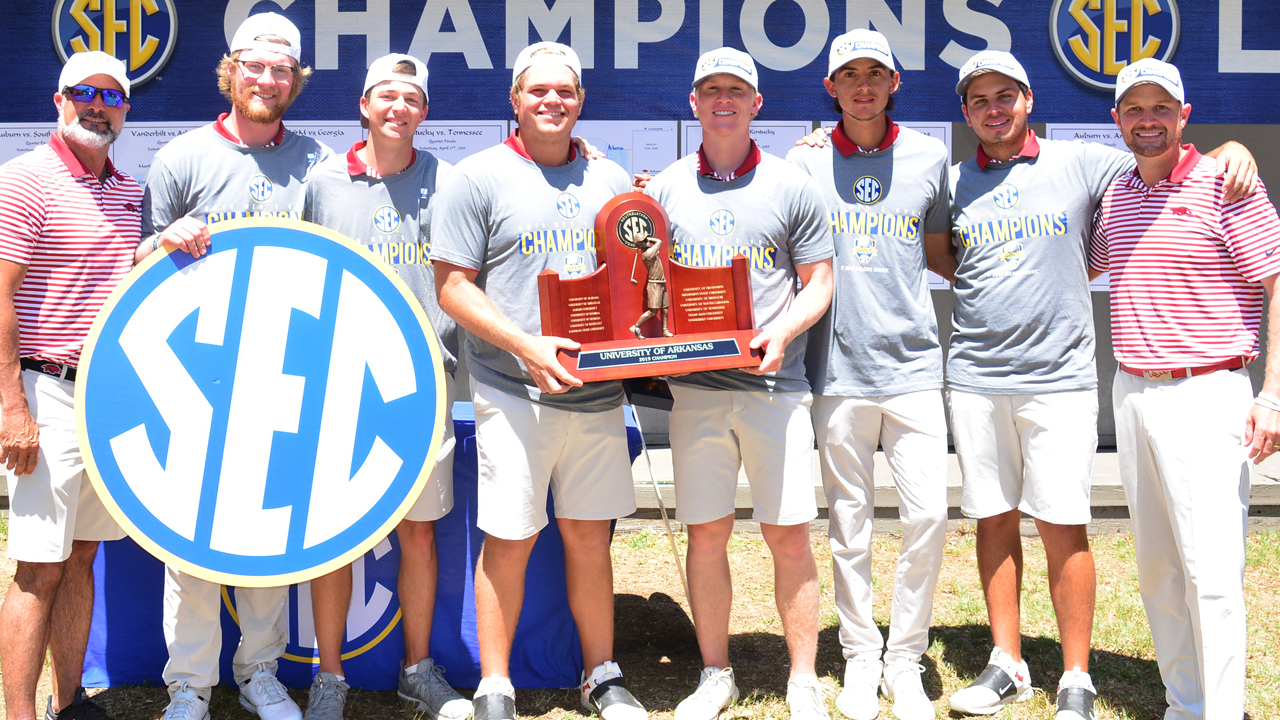 ST. SIMONS ISLAND, Ga. – Julian Perico won the 18th hole to give Arkansas its first SEC Men’s Golf Championship since 1995. Perico, William Buhl and Tyson Reeder each won their matches Sunday to give the Razorbacks a 3.5-1.5 victory over Auburn at Sea Island Golf Club (Seaside Course).

Perico, the only Razorback to win all three of his match play contests, was tied with Grayson Huff through 17 holes. Perico bombed his tee shot to wedge distance while his playing partner had to layup out of the fairway bunker.  Perico landed his approach shot to about nine feet and two-putted for the 1-Up win.

“We hung in there all day long,” said head coach Brad McMakin. “William (Buhl) went out and won that first point which I think is so key in match play. After Auburn tied it, Luis Garza and Julian were down one or two through 13 holes but they continued to fight and make a couple of putts.

“These guys will always be champions together,” McMakin continued. “This is a very close group, maybe the closest I’ve coached. They really came together over the last two months and showed this weekend what I thought they were capable of this season.”

The other match on the course was Garza and Jovan Rubala, who halved the final point. The pair was in a playoff on the 10th hole but was not completed after Perico’s win. Garza was 2-0-1 in his three matches.

As he did, in the semifinal, Buhl gave Arkansas its first point with an impressive win over Jacob Solomon. Down the stretch, Solomon threatened as he holed out from the front bunker for an eagle on 15. However, Buhl followed with an eagle of his own from the same bunker to remain 3-up with three to play. The junior then had a par on the 16th to secure the 3&2 win.

Mason Overstreet played well and was even par for the day but ran against a buzzsaw in Auburn’s Brandon Mancheno, who won 6&5 thanks to four birdies and an eagle to close the match and even the team score at 1-1.

Tyson Reeder put Arkansas up 2-1 after winning his match 2-up over Trace Crowe. Reeder led the whole round but Crowe cut his deficit to one by winning the 16th hole. Both players had par on 17 to make the 18th hole interesting. Reeder threw a dart into the 18th green while Crowe was off the green to the left. Crowe’s chip ran past Reeder’s ball and Reeder’s birdie putt was conceded for the 2-up win.

Arkansas will learn its destination for the 2019 NCAA Regional on Wednesday (May 1) from 8-9 pm (CT).