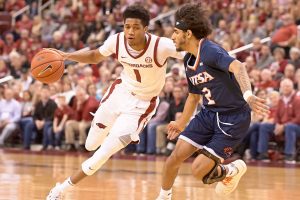 Four of Joe’s triples game in the first half, but his second-half shot was key for the Razorback (7-3), who found themselves in an unexpected late back-and-forth contest with the Roadrunners (3-7). With under 10 minutes to play, the undersized UTSA team led 52-48 and displayed an excellent game plan to shut down forward Daniel Gafford, who was limited to five points at that point.

Reggie Chaney hit a jumper to cut UTSA’s lead to two before Joe’s 3-pointer gave the Hogs a 53-52 lead. Jhivvan Jackson made a free throw to tie it at 53, but the Hogs didn’t trail after that point.

Gafford came alive with some key dunks late to rally the North Little Rock crowd, and finished 13 points and 14 rebounds. Chaney was as a quality understudy, putting up his second 11-point game of the season along with five rebounds and four assists.

Arkansas entered shooting 62.7 percent from the free-throw line, but the Hogs were 27 of 34 (79.4 percent) on Saturday night. Jalen Harris shot 7 of 8 from the line in the second half to play a part in fending off the Roadrunners, who hit five 3s to the Razorbacks’ one in the second half. The pass-first playmaker finished with 11 points and 10 assists to join Gafford in the double-double club.

Jackson led UTSA with 20 points before fouling out late in the second half. Keaton Wallace added 18 of his own.

Arkansas: In the first half, the Hogs relied on shots outside the paint, but Gafford was limited to two points. In the second half, their outside touch disappeared, but penetration opened up the lane and low post, and Gafford and Chaney showed an ability to be a one-two punch down low. . Harris’ 10 assists were the most registered by a Razorback in Verizon Arena, and Gafford’s 14 rebounds tied Moses Kingsley for the most in the building.

UTSA: The Roadrunners came into the game shooting 31.1 percent on 3s, and they went 8-for-29 shooting from deep Saturday night. Despite Arkansas doing a relatively solid job defensively from the perimeter, Jackson and Wallace attempted many step-back, isolation 3-pointers. They combined to shoot 7 for 23 from long range. . Senior forward Nick Allen held his own against Gafford, but once the Razorbacks focused on getting the ball inside during the second half, the Arizona native had a tough time staying out of foul trouble.