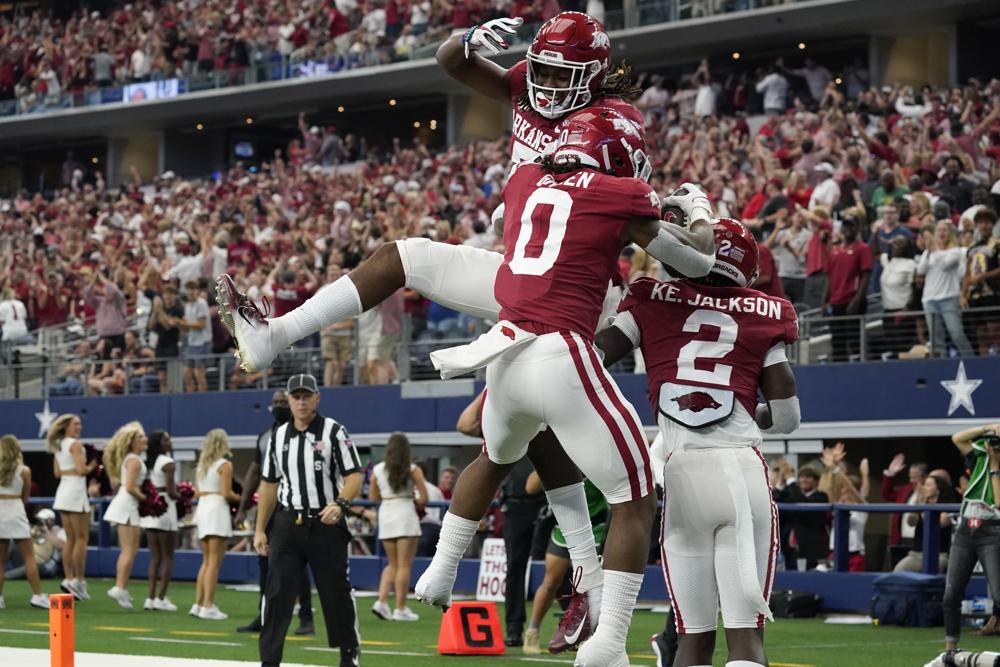 ARLINGTON, Texas (AP) — KJ Jefferson got back on the field late, bruised knee and all, bulling over a defender for a first down and then kneeling down on the final snap for No. 16 Arkansas.

Jefferson threw for 202 yards and two long touchdowns before getting hurt against a Texas A&M defense that hadn’t allowed a passing score this year, and Arkansas beat the seventh-ranked Aggies 20-10 on Saturday for its first victory in the series in their 10 seasons since becoming Southeastern Conference foes.

Jefferson came up limping and favoring his left leg after getting tackled out of bounds to start the second half, and left a few plays later. But he did return after the numbing gel took effect to finish off the SEC opener as Arkansas improved to 4-0 overall for the first time since 2003.

“Waiting for the medicine to kick in,” Jefferson said. “I knew I had to go back in and fight for my team.”

The Aggies hadn’t allowed a passing TD until Jefferson’s 85-yard score to Treylon Burks, who pushed by a defender and made the catch near the 40. Burks appeared to stumble, but stayed upright and sprinted down the right sideline for 10-0 lead late in the first quarter. Burks finished with six catches for 167 yards.

“You never win a game in the first 10, 15 minutes, but you can sure put yourself behind the 8-ball,” Aggies coach Jimbo Fisher said. “That’s what we did. We gave up big plays, big drives.”

Jefferson, who finished 7-of-15 passing for 212 yards overall and ran for 50 more, threw another TD early in the second quarter. AJ Green caught a pass in the left flat, shed one defender, did a stutter step around another one and then got a boost when linebacker Aaron Hansford basically pushed him past yet another defender inside the 25 on way to a 48-yard touchdown.

The Aggies cut the gap to 17-10 midway through the third quarter on Isaiah Spiller’s 67-yard TD run, when he took a handoff up the middle through an open gap and outran four defensive backs to the end zone.

“Really they had the one long run” Pittman said. “Basically it was our defense vs. their defense.”

Arkansas leads 42-33-1 overall in the series that dates back to 1903 and includes their time as longtime Southwest Conference rivals. But Texas A&M had won all nine meetings since joining the SEC in 2012, which was 20 years after the Razorbacks debuted in the league.

The Razorbacks were up 17-0 with 2 1/2 minutes to go in the first half when Trelon Smith, who had 82 yards rushing, got stuffed for no gain on fourth-and-1 at the A&M 22. The Aggies then drove for a field goal.

“Before anybody asks me, I would have went for that fourth-and-1 again,” Pittman said. “I thought at that point we could get ahead of them at 24-0 at half, and thought we would deflate them.”

Texas A&M: The Aggies had allowed 232 yards passing total in their first three games, the only team in the country allowing fewer than 100 a game. Arkansas had 229 yards passing at halftime.

Arkansas: Montaric Brown’s diving interception of a deflected pass early in the fourth quarter was the game’s only turnover, and set up the Razorbacks for a nine-play drive that ended with Cam Little’s 24-yard field goal. Little had a 46-yarder about 6 minutes into the game for the first points against A&M in eight quarters.

Arkansas will almost certainly move up a few spots, and will have its highest ranking since reaching No. 8 during the 2012 season. The Razorbacks came in ranked No. 16, matching their best since then. The Aggies will still be ranked. It’s just a matter of how far they fall after 15 consecutive AP polls since last October ranked in the top 10.