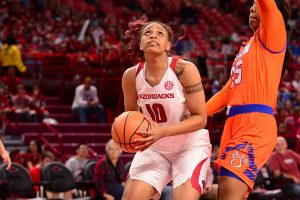 OXFORD, MISS. – The University of Arkansas women’s basketball team had four players in double figures including a double-double from junior Kiara Williams in an 85-55 Southeastern Conference road win in Oxford, on Sunday.

Williams had her second double-double of the season with 13 points and 10 boards and was one of four players who scored in double digits for Arkansas (12-4, 1-1 SEC). Chelsea Dungee scored in double figures for the 14th time this year with a game-high 17 points including a 4-for-4 performance from the line.

Malica Monk and Jailyn Mason dropped in 16 points each. It was Monk’s 13th game in double figures and it was a season-best for Mason.

A pair of scoring runs in the second quarter allowed Arkansas to open a 17-point lead at the half. The frame opened with the Razorbacks scoring six in a row in under two minutes. That stretched the lead to eight points for Arkansas.

Ole Miss (6-10, 0-2 SEC) added four points to their side of the ledger before Arkansas went on a 13-0 run to lead by as many as 20 points with just under three minutes to play in the second period. Monk and Mason had 11 points each leading all scorers at the break.

Nearly everything went right for Arkansas in the game. The Razorbacks shot nearly 48% from the floor and counted 12 made 3-point field goals, getting double digit makes from distance for the sixth time this year. Arkansas had a big rebounding advantage in the first half and the boards finished even with 39 each but Arkansas won the turnover battle forcing 15 Ole Miss miscues in the game.

Up Next
Arkansas travels to Missouri on Thursday followed by a home game with Vanderbilt on Jan. 13.