Razorbacks Fight in Loss at No. 11 Florida

Razorbacks Fight in Loss at No. 11 Florida 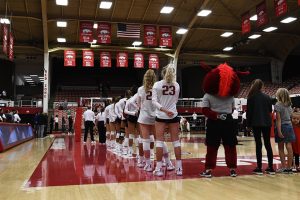 GAINESVILLE, Fla.- The Arkansas volleyball team fell 3-1 in the final of a three-match road stretch at No. 11 Florida Sunday afternoon.

The Hogs started the match off strong, winning the first set 25-20. Arkansas scored eight of the final 11 points in the set.

The Gators evened the match in the second, winning set two 25-15. The team went up 2-1 following a 25-20 third set victory, despite a fight from the Razorbacks. Florida put the match away in the fourth set with a 25-15 win.

Arkansas will return to the court for the first of a four-match homestand, hosting Georgia Friday night at 7 p.m.

For Native Americans, the fight against mascots is much bigger than sports

Megan Rapinoe opens up about her fight for social justice, equality in memoir