Razorbacks Drop One Late to WKU

Razorbacks Drop One Late to WKU 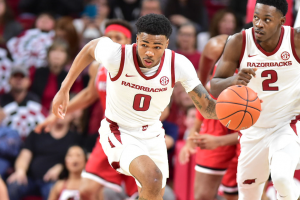 FAYETTEVILLE – Arkansas had two chances within the final 19 seconds to win the game but came up short as Western Kentucky held on for a 78-77 victory over the Razorbacks Saturday afternoon at Bud Walton Arena.

The Razorbacks only led once, 77-76, inside the final 15:37 of the second half when Daniel Gafford made a jumper with 45 seconds left in the contest. The Hilltoppers regained the lead after Marek Nelson converted a layup with 19 ticks left. WKU center Charles Bassey blocked both of the Razorbacks’ final attempts to preserve the win.

Bassey finished with 21 points and nine rebounds to lead the Hilltoppers. Jared Savage scored 20 points while Taveion Hollingsworth had 17.

Isaiah Joe led the Razorbacks with 19 points while Gafford had 19 points and nine rebounds.  Mason Jones added 15 points and Jalen Harris had 13. Harris, who ranked third in the NCAA in assist-to-turnover ratio entering the game, finished with seven helpers versus zero turnovers in 37 minutes of action.

SECOND HALF: Arkansas had a shot two shots to win it inside the final 19 seconds.