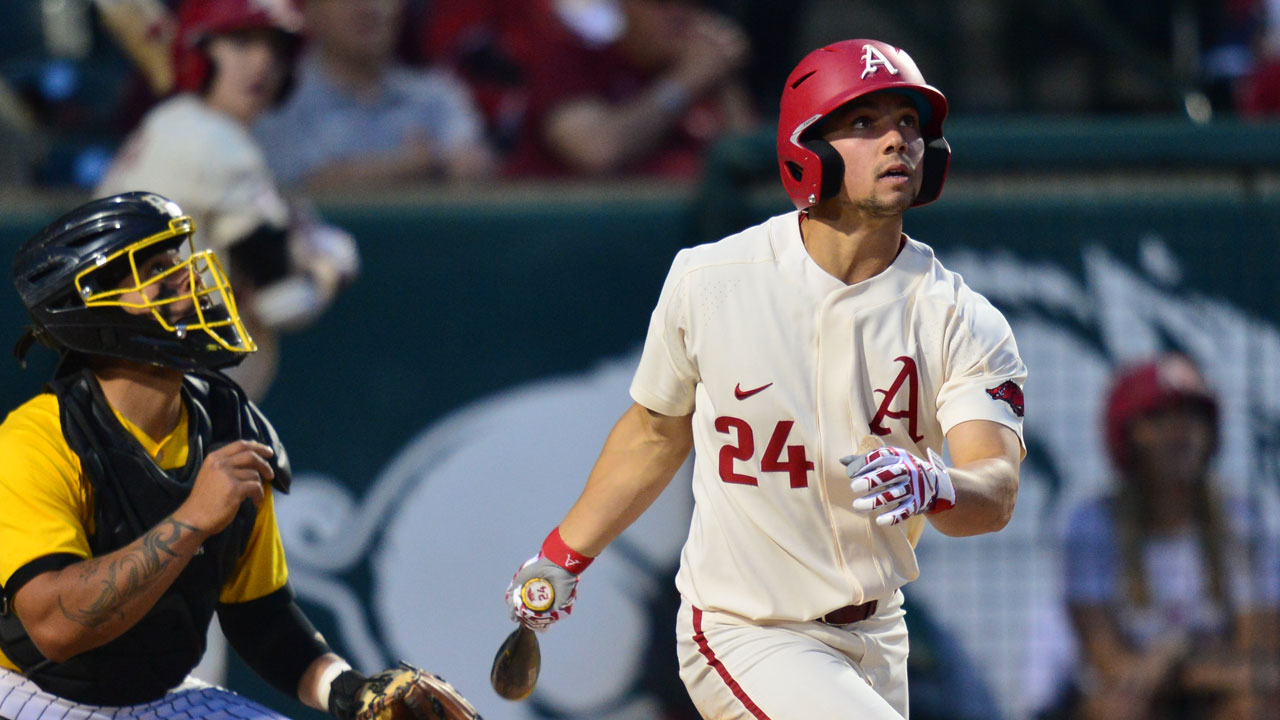 FAYETTEVILLE, Ark. – The 10th-ranked Razorback baseball team got off to a quick start Tuesday against Arkansas-Pine Bluff and never slowed down, as it cruised to a 16-4 run-rule victory in seven innings, for its second win in a row.

Arkansas (27-10, 9-6 SEC) scored its first 12 runs in the first three innings and was in control from, seemingly, the first pitch as Trevor Ezell led off the game with a triple and was brought in to score on a Casey Martin single. Seven of Arkansas’ nine starters recorded at least one hit in the game, with six getting two hits or more.

For the fifth time this year, the Razorbacks hit three home runs in the game as Dominic Fletcher, Jack Kenley and Martin all went deep. Martin and Kenley both are now tied for second on the team with seven home runs, while Fletcher now has five on the year and 27 for his career.

Ezell and Martin led all Razorback hitters with three hits each. Ezell’s other two hits in the game were both singles, coming in the second and fifth innings. Martin singled again in the fourth before hitting his seventh home run of the year in the fifth inning, driving in three more runs for a season-high four RBIs.

Martin now has at least one hit in 12 of his last 14 games and has recorded two or more hits in four of his last five games. Ezell has had a similar run as of late as he finished Tuesday’s game 3-for-4 with a season-high four runs scored and one walk. He’s tallied 14 hits in his last nine games with seven extra-base hits in that span. His first-inning triple was his second of the year.

Fletcher and sophomore Matt Goodheart also turned in perfect nights at the plate as Goodheart was 2-for-2 with three walks. The three walks was a career-high and he is 19 for his last 40 at-bats (.475) and extended his hitting streak to 10 games. Fletcher was 3-for-3, tying a career-high of five RBIs, three coming from his home run in the third inning. It was his fifth game with three hits or more this year.

Freshman Connor Noland picked up his first win of the season, giving up only two hits over two scoreless innings in his 10th start of the year. Noland, who was on a pitch count, faced seven batters over the first two innings and struck out two while throwing 23 pitches.

Razorback Quotables
“It was contagious. I think it was contagious on Sunday (at Vanderbilt). They guys didn’t want to let each other down. They kept fighting and I mean we had 22 hits on Sunday and another 15 of 16 today. That’s hard to do and I think the offense is clicking a little bit now and it’s going to need to with the team that’s rolling in here on Thursday.” – Head coach Dave Van Horn on the offensive surge over the last two games

“He’s just continued to get better really the last month when he realized he needed to see a little better. The more at-bats he gets, he’s been patient, he’s fouled off a lot of pitches and works to get one he can handle a little bit. He’s just doing a good job. Going the other way, up the middle, if he gets a pitch in, he’s pulled them. He’s a mature hitter doing a great job.” – Head coach Dave Van Horn on Matt Goodheart

Up Next
Arkansas remains home for an important SEC series against Mississippi State starting on Thursday at Baum-Walker Stadium. The series opener is set for 8 p.m. on ESPNU, while game two will follow on Friday at 6:30 p.m. on SEC Network+. The series finale will be played on Saturday at 2 p.m., also on SEC Network+.