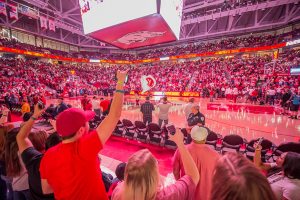 FAYETTEVILLE – Daniel Gafford had a double-double (17 points and 12 rebounds), while Isaiah Joe had a game-high 19 points and Mason Jones added 17 points, to lead Arkansas to a 100-63 victory over Southwest Baptist in the Razorbacks’ second and final exhibition game prior to next Friday’s season opener versus Texas in the ESPN Armed Forces Classic at Fort Bliss in El Paso, Texas.

Much as they did in the first exhibition, Arkansas turned a close game at halftime into a blow-out early in the second half as the Razorbacks went on an 18-4 run to put the game out of reach.

In a tale of two halves, Arkansas only had nine assists with 10 turnovers in the first half while using its up-tempo brand to dish out 12 second-half assists while committing just five turnovers. Defensively, Arkansas forced 15 turnovers each period and finished with 18 steals – nine each half.

Arkansas will open the 2018-19 season next Friday (Nov. 9) versus Texas in the ESPN Armed Forces Classic. The game will be played on Fort Bliss military base in El Paso, Texas. Tip-off is set for 6 pm (CT)/5 pm (MT).

–  The Bearcats trimmed their deficit to six (36-30), thanks to a 3-pointer by Quinn Nelson, with two minutes to play in the period.

– Desi Sills drained a pair of free throws and Daniel Gafford made a layup with 39 seconds left to put the Razorbacks up 10 at the break.

SECOND HALF: Arkansas out-scored the Bearcats 60-33

– Teams traded baskets the first two trips down the floor to start the second half until Isaiah Joe sank back-to-back 3-pointers two-and-a-half minutes into the half. Those treys ignited an 11-0 run to put the home team up 21 (55-34). All told, Arkansas had an 18-4 run as the clock went under 14 minutes.

– At the 8-minute media timeout, Arkansas pushed its lead to 30, 81-51. In the first 12 minutes of the second half alone, Daniel Gafford put up eight points and seven rebounds while Isaiah Joe had nine points on 3-of-4 shooting beyond the arc.

– Ethan Henderson had a break-away dunk just before the final buzzer to put the Razorbacks in triple digits.

– Arkansas won both exhibitions this season by an average margin of 43 points, including a 49-point win versus Tusculum and a 37-point win over Southwest Baptist.

– Arkansas has won 30 consecutive exhibition games dating back to 2004-05 season.