ABC’s The Conners didn’t come close to the blockbuster premiere rating of its predecessor, the reboot of Roseanne, but the new series did have strong numbers that led Tuesday night in the ratings. The debut airing delivered 10.5 million viewers and a 2.3 rating among adults 18-49. While that is down 55% from the premiere of Roseanne last spring, it managed to edge out NBC’s This Is Us for the night. ABC did not expect Roseanne premiere-level numbers, and it was predicted that audience interest in the spin-off was about half that of viewer interest in Roseanne before its return. The debut episode, titled “Keep on Trucking,” confirmed previous reports that Roseanne Conner died of an opioid overdose. Roseanne Barr said in a statement that the “opioid overdose lent an unnecessary grim and morbid dimension to an otherwise happy family show.” 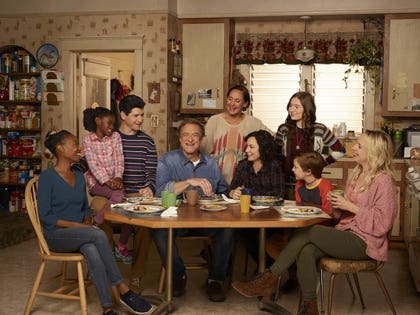 Via www.forbes.com
Barr made an additional statement that was posted on Rabbi Shmuley Boteach’s Facebook…
10/17/2018 12:47 PM

Robin Wright reflects on her directorial debut, ‘Land’: “It was the greatest experience”