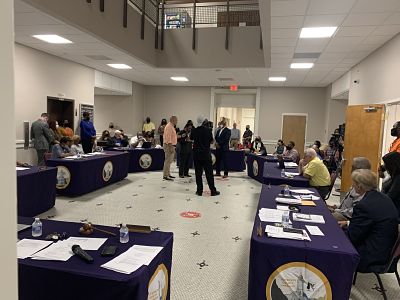 During the special meeting, the funding for a new position of county clerk was approved to be passed on to the finance committee without consent. The Budget and Finance Committee led by Justice Jimmy Fisher discussed two ordinances on the agenda that were also approved to move to the Quorum Court. The first ordinance was to appropriate funds from the reserve to fund the county road fund that will go towards the repair of two bridges within the county under the construction of Styled Bridges and Steel.

Those two bridges, the first on Wilson Road in the Pastoria area and the second on Mulberry in Altheimer. After the full Quorum Court approval to fund the project,  Jefferson County Judge Gerald Robinson spoke about when the construction is expected to take place.

The second item on the committees’ agenda that was passed on was the amendment of appropriation of ordinance 2020-160, of the general fund budget and provide for a supplemental appropriation to various departments of the county for an additional salary increase for all full-time employees.

During the regular Quorum Court meeting, the court had a full list of new business items on the agenda that they passed quickly after a few presentations that took place prior. Those presentations included announcing COVID benefits to those in Jefferson County that lost someone due to COVID-19.

The benefits were financial awards to help families cope with the loss of someone in their immediate family including widows and widowers. There was a total of nine award recipients who received between $4,000 to $25,000 based on the need. The county used $300,000 from the COVID-19 American Rescue Relief Plan that is now at a total of $194,834.37 that will be awarded to future recipients.

Of those recipients from the meeting were Laetta Williams the widow of the late Reverend Leon Williams Sr., and she gave a few words of her appreciation for the award.

Once the meeting progressed, under new business on the Agenda, the court approved 15 items that included a 6% salary increase and to provided supplemental appropriation to various county departments of the county general fund for an additional salary increase that is comparable to other counties. Employees of the county gave a clapping ovation after the court passed that ordinance and Robinson responded.